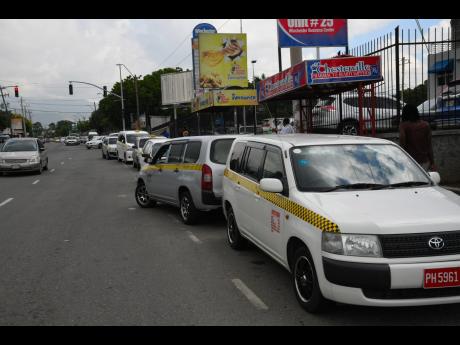 Commuters in the Corporate Area are dreading the first day of school on Monday.
With the promised withdrawal of taxi services by the Transport Operators Development Sustainable Services (TODSS) group, and some of its associates, members of the public say they would have to come out early in order to make it on time for work and school.
Marsha, who travels from Vineyard Town to work in the downtown area, believes that a strike would affect everyone.
“It is the first day of school and children need to go out for school and people need to go to work. So stopping their services will impact people tremendously,” she said.
Devon, who sells in the downtown area, said that he prefers to take the bus, but he is aware that without the taxi services, many people will suffer.
“Why didn’t they strike before the first day of school? People a go late for school and work now. I think that they should have done this earlier,” he said.
President of TODSS, Egeton Newman, said they have had countless meetings with the Transport Ministry and all their queries have fallen on deaf ears.
He said that for the past seven years, they have been giving their services without a consideration of raising the fare and now they deserve one.
Newman said they demand a 100 per cent increase. “But this is a negotiation. So if we get 50 per cent increase, we will take it,” he said.
He said that the strike has been in the works for roughly three months. He said that after the many failed meetings with the ministry, they wrote a letter indicating their plans and up to press time, they had not received a response.
“We can’t be blamed for what is going to happen because we have been talking to the government for 14 months and they have not responded to us. And then we decided that in order to get our questions answered, we need to take action on the first Monday morning of September,” he said. “Yes students and workers will feel it. What we are urging is that parents find alternative transportation to send their kids to school.”