STAR of the Month: Spice spoils her children because she can 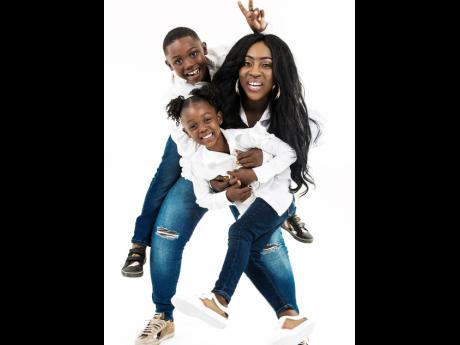 Spice with her children, Nicholas and Nicholatoy

Many know Spice the entertainer as a hardcore individual, but when it comes to her children, she is soft as a teddy bear.

Growing up, she did not have the luxury of getting all the things she desired and, as such, she has decided to give her children all that she never had.

When she was younger, the singjay said she would see children with their dolls and she wanted one, but her parents could not afford it. Being a creative individual, she used to 'tek har han and mek fashion' by creating stick dolls to soothe her wants.

These days, she can afford to give her children anything they desire, and that is exactly what she does.

"When I saw other kids with their dolls, it used to do something to me, and the fact that I am in a better position, people can call it spoil if they want, but I call it doing what I want because I can. So when I go to the shop and the doll is for US$10 and I know I can buy more than one, I am going to because I can afford to. I am going to try and give my children what I didn't have," she said.

Her son loves football and she would go out and play football with him or call on one of her male relatives to play with him.

Her tours will not hinder her from talking and sharing a moment with her children either, as Spice sets times to talk to them when she is not in Jamaica.

She recalls talking to her son and he expressed that he wanted her around. But she reassured him that even though she is not there physically, her love is always with him.

"My son would sometimes say, 'mommy, I know, that you give me everything but I just want you,' and I said, 'if I stop working I can't afford all you want,' and him seh, 'mommy, the truth is, I don't want anything more; I just want you'," she said.

With her son in grade six, Spice is ensuring that he gets all the help that is required to get him ready as he is in the first batch to sit the Primary Exit Profile (PEP) test.

She said while her children love entertainment and social media, there are days she has to be rough on them to get them prepared for exams.

"I pay two separate tutors, one in the week and one on the weekend to help him prepare for the PEP test, and I have my sister who helps out sometimes," she said.