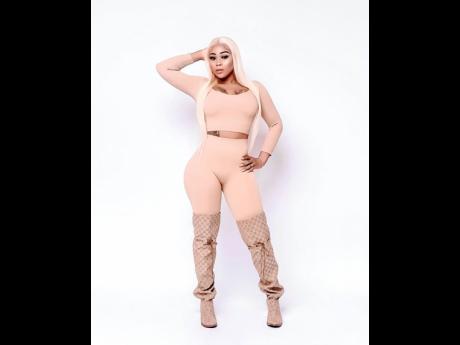 Born in Westmoreland, she lived in Kingston for most of her school days. The Holy Trinity High School alumna believes music has always been in her genes.

"My mom would sing at church, parties, funerals, weddings. When in school, I was always passionate about music. I would do counteractions of songs that Vybz Kartel and Mavado would do. I would knock the desk in class and give a vibe," she said. "It was only four years ago when I started doing music professionally."

The entertainer told THE STAR the name 'Goal Digga' came from listening to, and singing the Kanye West and Jamie Foxx song Gold Digger.

"So friends and family would call me that but I didn't really like the name. I never rely on any man to do things for me because I am not that type of girl. I am very independent. Everyone would call me gold digger and I would cry. Whenever I gave a reaction, them trouble me more so I owned the name and say yes I am a 'Goal Digga'. I changed the spelling of the name because goals are things that people work to achieve in their life. When people see spelling change, them say them love it and mi smart fi do that."

She said that she has quite a few singles out already, but said TopNotch gave her a buzz on the Internet.

Goal Digga has seen a large support from local fans since she started doing counteraction songs from artistes like Jahvillani, Teejay and Skillibeng

"I don't consider myself as a local artiste, I am more international. The reason for me saying this is that my kind of music is more afrobeat and pop. Since I started doing more counteraction dancehall songs, the dancehall fan base skyrocketed. I decided people needed to see how versatile I am," she said. Goal Digga noted persons say she sounds like Lady Saw, and said she envisions doing music for some years.

"I wouldn't say it is for the rest of my life because honestly you don't know what can happen. I just want to try and put myself out there without piggy backing on other person's career. I am a goal digger," she said.