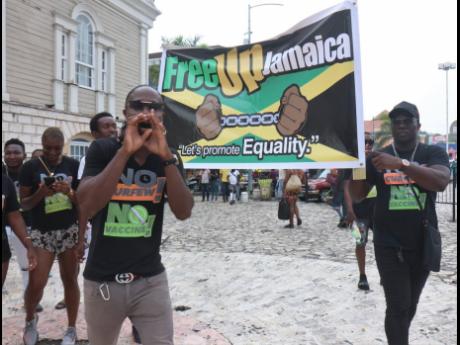 Some members of the entertainment fraternity in Montego Bay stage a peaceful protest on St James Street last Saturday.

Some members of the entertainment fraternity in Montego Bay have rejected the $50-million allocation that the Government promises to put towards the industry.

Several of them are not pleased with the Government's stance on entertainment, as they feel that they are being slighted in favour of tourists.

Citing the recent case in Negril where Mocha Fest was allowed to go on for almost one week undisturbed, Paul 'Maxvillian' Bailey says there cannot be one law for the rich and one for the poor.

"If the prime minister says no party must keep in Jamaica, then none must keep. You can't have one set of people staging parties because they are upper class, and we, the lower class, are either being chased by police or locked up. Borders are opened up for tourists and they can enjoy my country, and I can't. I am tired of the double standards, and we want equality," Bailey said. "The $50 million that the Government says they will allocate to us, while it looks appealing, it will not be beneficial to us."

Bailey said the sum will not be feasible because the sector is too big and the money cannot be shared for so many people.

"We believe they should use it to buy beds for hospitals, because there are people who are sick that have no bed to lay on. We suggest that instead of giving us handouts, the Government should reopen the sector and give us a chance to generate our own earnings," said Bailey.

Popular disc jockey Shawn 'DJ Kentucky' Stewart told THE STAR that he is not convinced that the promises will be fulfilled.

"They have special corridors to host events for foreigners and clamp down on locals. This makes no sense, because this is one country and we are one people. I am tired of the bias and inequality in this country. When I look overseas, other countries have their entertainment industry opening up. What is the difference here in Jamaica?" he asked.

In an April article, The Gleaner reported that the entertainment and sporting sectors had lost J$2.5 billion in February and March.