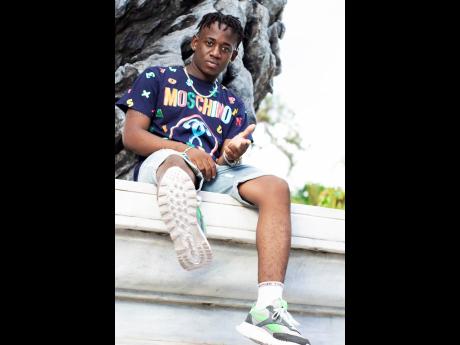 Fresh from his recent success with the single More Money, dancehall singjay Pesh Don has released a follow-up track that was recorded to bring awareness to the health benefits of marijuana.

"Education on marijuana consumption is important. People who don't consume the herb may not understand, and it's in no way telling someone they should smoke it, but to see how it can benefit someone in different ways," Pesh Don told THE WEEKEND STAR.

He said he is also informing his peers who are cigarette smokers to watch their intake of nicotine and caffeine because both can be damaging.

The song, titled Smoking for Days, was released and distributed through Diamond Ink Productions and MusiqUK Recordz labels.

"Marijuana is for all parts of the body. We know it can be used on skin, in the hair or even drink to help people with chronic illnesses. It's time for the stigma to be broken and I'm reaching a lot of people," he said. "I'm giving the dancehall fraternity and fans fresh, new vocals with a unique flow and sound."

He said that he has covered a wide age group of dancehall lovers. He also believes that in the seven years he has been pursuing a career in music, he has received incredible traction with the release of More Money, which was produced by Koolface Records, and Soon Alright,which was done with Diamond Ink Productions that also doubles as his management company.

Pesh Don's manager Iokeno Taylor said the team is focusing on growing the artiste's fan base by delivering songs with relevant content.

"We plan to do this whilst developing his brand and getting him that breakthrough song to stamp his name amongst the greats in the music industry," Taylor said.