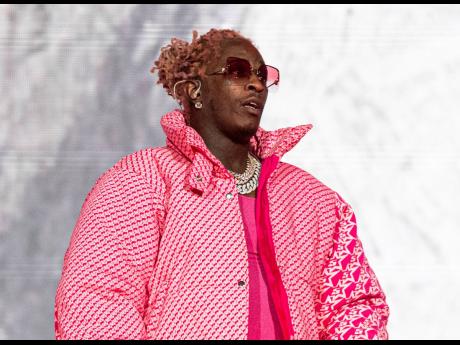 FILE – Young Thug performs at the Lollapalooza Music Festival in Chicago on August 1.

Atlanta rapper Young Thug said an apartment concierge let an unknown person take his Louis Vuitton bag holding about 200 unreleased songs and more than US$100,000 worth of jewellery and cash.

The performer's allegations are in a lawsuit against the company that manages the apartment complex where he lived and its concierge company, The Atlanta Journal-Constitution reported.

The newspaper said neither JLB Peachtree nor concierge company Pegasus Residential has answered requests for comment about the lawsuit filed last week in Gwinnett County Superior Court on behalf of Jeffery Williams, Young Thug's given name.

According to the lawsuit, a concierge at Trace Apartments put the bag in a secure location after the 30-year-old rapper accidentally left it next to his vehicle on November 1, 2020, but another employee released it to someone else.

The missing bag contained a hard drive with about 200 unreleased songs that are worth at least US$1 million, the lawsuit said.