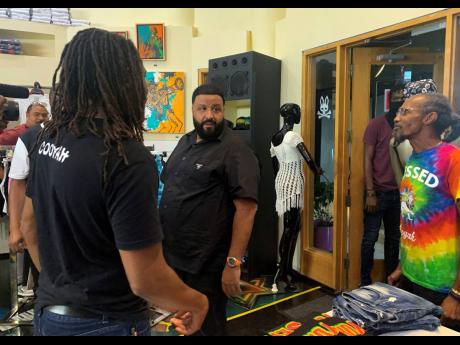 The international superstar has been connecting with veteran acts and some of biggest names in reggae and dancehall including Buju Banton, Capleton, Sizzla and Bounty Killer as well as fast-rising dancehall deejay Skillibeng, which has the music industry predicting a monumental album in the making.

Buju Banton, Capleton and Bounty Killer were featured on DJ Khaled's single Where You Come From, also featuring Barrington Levy, which was on his 12th album Khaled Khaled which was released last year.

While DJ Khaled is not bashful about the Jamaican entertainers he is working with or will potentially feature on the album, the production appears to be top secret, as he makes certain no audio from studio sessions is shared in his posts online. He has, however, revealed that the album cover shoot has been done locally, which comes as no surprise since he has stated that Jamaica is like his second home. DJ Khaled repeatedly promised that the album will be "very special".

During a recent tour around Kingston, THE WEEKEND STAR caught the entertainer at the Cooyah Clothing Store, under the supervision of Sharon Burke, who repeated the same sentiment that the album is special. "Just wait until the album is to be released," said the music executive and artiste manager.

DJ Khaled was officially honoured with the 2,719th star on the Hollywood Walk of Fame in April. Burke developed a solid relationship with DJ Khaled since the early 90s when both of them were laying the foundation for their brands. It has evolved into a friendship that has been equally beneficial to their growth and made her proud not only as a partner for special projects but as his friend.