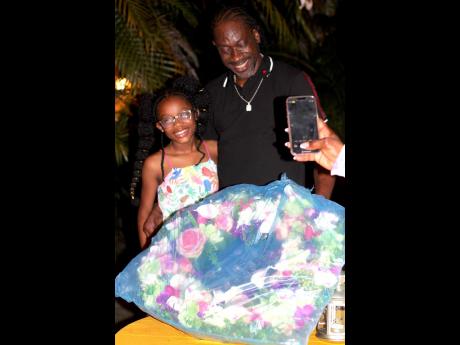 Even the usually stoic Bounty Killer could not hide his emotions as Jazmin presented him with a floral tribute to his mother Ivy Williams.

The two entertainers also strengthened their philanthropic efforts by collaborating on a project to give back to the needy without even having a face-to-face introduction.

"It was manager, Bankey, who was the one to bring my attention to this child, who said that on her ninth birthday, she wanted to donate nine barrels to the foundation," Bounty Killer told THE WEEKEND STAR. "I was like that a nine-year-old wants to do something this big. He informed me of who she was, that she works and bought the things, and not that somebody gave them to her. It was very interesting."

The It's A Party deejay made an appearance at a private welcoming reception held at a private location in Kingston for Headley last Wednesday, where he received the surprise of a lifetime. Headley presented the entertainer with several gifts, including a floral wreath in memory of his mother Ivy Williams, who passed away 10 years ago.

He tried to maintain his hard-faced expression as Headley handed over the token of appreciation, but was defeated by her sweet personality.

Bounty Killer said, "From my mother passed not many have done anything like this to remember her. She always touches my heart. 'Jazz' brings a lot of joy. This is the only child I would say I wish she was my child. I don't wish my child was like her but that she was actually my child. She is a gem."

Charity is not the only thing the two have collaborated on. An upcoming single titled Sing, Sing, Sing features them both.

"When I met her online, and the more we start to talk, I picked her mind. I come to realise she is smart and clever and just how involved she is in giving back. That was over a year ago. Then I found out she was also a singer. When I found out the talent she have and just see her beautiful soul, I wanted to do all the things I can to support her," Bounty Killer shared.

"I expect good things for a track like this. With a little child singing on a song, singing that well and she singing a good topic, to 'sing, sing, sing' and 'let's party', it should be good. Jazz is on a good path and she is very established, though I only see snippets posted of her on the internet, I know she has a little fan base building."

Bounty Killer also revealed intentions to have Headley signed to his Alliance camp.

"We aren't letting her go, she is going to be a big part of my organisation, maybe we even sign her. We will be doing more with Jazz because she is going to take the world by storm," he said.