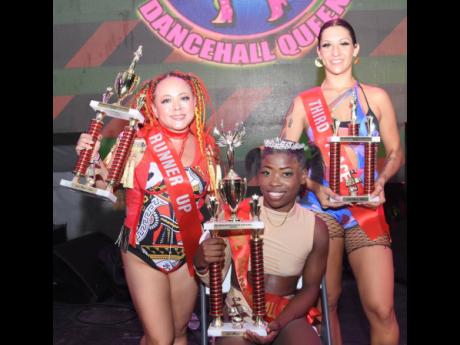 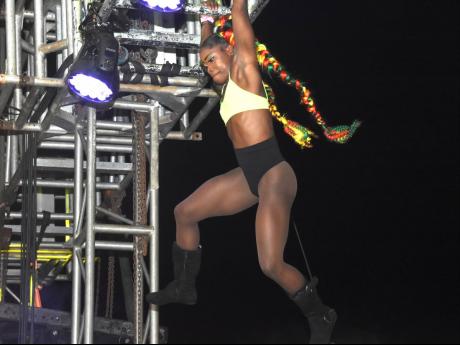 ‘Chicken’ hangs on to the triangular truss, showing off her nimble cat-like movements, a big part of the reason she took the top prize.
1
2

"I am feeling great, and lost for words. I felt great when they chose me as the wild card," said Francis, a first-time entrant who was selected for re-entry by the competition's hosts, despite not initially making the top five.

During her daringly acrobatic performance, Francis climbed to the top of the stage's triangular truss with nimble, cat-like movements. From there, she leaped and landed on her feet, wowing the crowd with her reflexes. Francis, a native of St Elizabeth, helped Jamaica to keep the title with her triumph. She came out on top ahead of Japan's Masaki 'BomBom' Hirata, who claimed the first runner-up position for the third time, and Austria's Jasmin 'Jasmin Xqlusiv' Halper, the second runner-up who also won best dance routine.

Francis, who won a $500,000 cash prize along with her first-place trophy and a Samsung cell phone, said she was encouraged to enter by the 2013 and 2014 winners, Tallup and Danger.

"[They] told me that I have the talent so I must go out there and showcase my talent. I will continue to go out and dance, to showcase my talent, and to encourage other dancers to do their best and don't be shy," said Francis, adding that she ironically got more support in Montego Bay than she did in her native St Elizabeth.

The show, which started sometime after 11:30 p.m. on Saturday, had contestants introducing themselves in Jamaica's national colours in honour of the 60th anniversary of Independence. Twenty-five entrants from 17 countries vied for the coveted title; six of them were Jamaicans. Brian 'Big Head' Martin, CEO of Big Head Promotions, the promoters of the annual event, said he was pleased to see the audience turnout for the competition, which had been on hiatus since 2016.

"I could tell it wasn't the biggest crowd, but considering the COVID-19 pandemic and the fact that this wasn't planned earlier on in the year, I have enjoyed it," said Martin. "A lot of people were telling me it was a good show. It was not drawn out like in previous years, and the girls were doing their best."

Martin added "I have always said that this is my biggest contribution to society, to bring people to a level of enjoyment. And if I can make peace through music or entertainment, that is my contribution."

The show attracted thousands of patrons from all over the world to watch the women displaying popular, mesmerising dance moves while unleashing their creativity.

In addition to the contestants' moves, patrons enjoyed the music of Pure Player sound system and DJ Crazy Chris, who had them in a dancing frenzy with pulsating dancehall music.