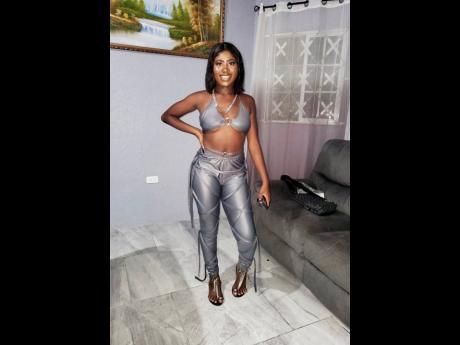 Jeneva 'Spirit' Sawyers, the 19-year-old dancer who was stabbed one week ago, allegedly by another dancer, is out of hospital and on the road to recovery.

Sawyers, a member of Royalty Divazs, governed by former spiritual adviser Nardo 'RT Boss' Smith, says she has no intention of giving up dancing.

"I love dancing and I don't want to give it up ... and I am still supporting my boss song, Shake and Go Dung," she said.

Sawyers was stabbed after leaving an event at a popular restaurant, bar and lounge on Hagley Park Road in St Andrew. She admits that she is still "shocked, shocked shocked" about the incident and vows to avoid arguments.

"When I see how I end up in hospital with one lung puncture ... all because of an argument ... I could have lost my life," Saywers told THE WEEKEND STAR.

She added: "All now mi cyaan cry. I was at Public [Kingston Public Hospital] for five days. The doctors had to cut me below my breast and put in a tube to drain out the battered blood. The stab wasn't long, but it was deep ... and the doctors seh is a good thing it lean to my lung or else it would have gone to my heart."

She shared that the night of the incident, she was just returning to her job after being away owing to a brief illness.

"Same Sunday mi come back is that mi walk into ... stabbed as I was getting into the car that was taking me home," Sawyers recalled of the incident that took place outside a bar on Hagley Park Road.

Her attacker has been charged for the stabbing.

Meanwhile, Spirit said that she wants to start working again as soon as she gets the all clear from the doctors. She said that in addition to being a gifted dancer, she is also a good cosmetologist.

"I can do hair to. I used to attend Kingston High, but I didn't graduate," said Sawyers, a teen mother.

"After I found out that I was pregnant, I attended the Women's Centre and then Excelsior where I did cosmetology, and I really like it. People always tell me that I should consider doing things other than dancing ... but I dont know," she said.