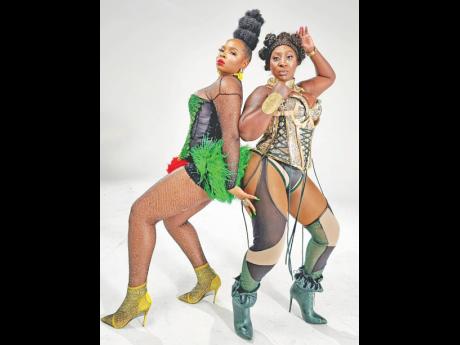 Nigerian recording superstar Yemi Alade is hoping to strengthen the bridge that is being formed between Afrobeats and dancehall artistes.

Approximately one week ago she released her latest single Bubble It, which is an ode to her love of dancehall and Jamaican culture. The single features the proclaimed 'Queen of Dancehall' Spice. Both strong female entertainers, they hold firm to the theme and get the pot bubbling with scorching dance choreography which is a mixture of both Jamaican and Nigerian movements and wining patterns.

Yemi Alade, who has collaborated with other Jamaican acts, told THE STAR that she saw a need to show more of that versatility and how much she loved the music and artistes like Spice.

"I've always loved dancehall and I realised Spice and I were becoming good friends online, whereas we both would publicly show appreciation for each other's work. We finally met face-to-face for the first time, just going about our businesses in Atlanta in November 2021. It started feeling like something I needed to do musically," Yemi Alade said.

She added, "I believe that I needed to take that friendship and admiration and put it in a song. It just so happened that while recording music with my producer in Ghana, I heard that track and immediately thought of Spice. I recorded my verse and chorus and sent it to her. We are already seeing that Bubble It is doing well, and there are even greater prospects for the track."

The music video, which was recorded in Atlanta, has already amassed more than 3.5million views on YouTube, exceeding that of the Afro-pop collaboration with Kranium, which Yemi Alade released in May. What makes the audiovisual production even better is that both artistes, who are dubbed queens in their individual genres, equally share the attention and are engaging the audience as well as each other.

"First of all, you don't have to wear a crown to be a queen; being a queen starts from the inside. Speaking for myself, from the beginning of my career, if anyone remembers the title of my first album was King of Queens. I had already given myself the title before the public did," Yemi Alade said.

She has been called the 'Queen of Afrobeats', 'Queen of Afro-pop' and Nigerian Queen of Music Videos' among other titles. As she eloquently puts it, "It's about knowing who you are and your standards".

"For an artiste to be called a queen or even a king in her [or his] career, it's up to the individual and then their followship. A queen is someone who is loved, respected and can be seen as a role model," she said. "I love and respect my fellow female artistes whether dancehall, R&B, Afrobeats and soca...I do like Shenseea but we haven't met as yet, and Patrice Roberts [soca star]. I want to connect with more of our global music queens and for people to continue supporting the music."