No competition in music any more, says Skinny Fabulous 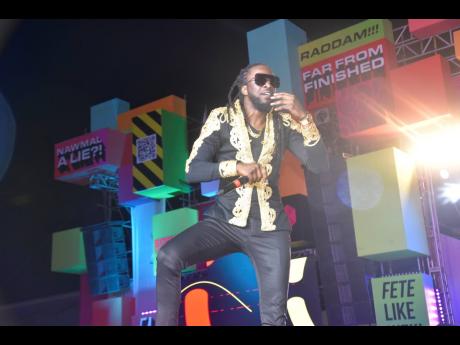 Music is widely regarded as the universal language. However, over the years, with different genres being originated and popularised by a particular country or region, we often see where they end up competing on the world market.

Nevertheless, as the global appeal of some sounds such as Afrobeats and reggaeton continues to rise, there is also an amalgamation of genres taking place. According to five-time Soca Monarch winner, Skinny Fabulous, artistes are just now focusing on the bigger picture.

"There is no competition any more, there is just music," he told THE STAR. "What happened is that the world is actually a much smaller place now. So, because the world is smaller, we are now exposed to every genre with the same level of intensity. So people are open to listening to everything."

Skinny Fabulous was speaking following his performance on Night 2 of the Soca+ Festival held in Kingston last weekend. The show was aimed at satisfying eventgoers' appetite for not only soca music, but additional genres and more creative work from the entertainment industry. From crossover acts such as dancehall artiste Shenseea, to collaborations such as Nicki Minaj on Skillibeng's Crocodile Teeth and Skeng's Lickle Miss, and even Spice teaming up with Nigerin star Yemi Alade, there is noticeably an increase in fusions sounds. Though collaborations with Caribbean and international artistes are no new phenomenon, it is difficult to ignore the increased frequency. Furthermore, the mixture has given rise to new genres, and for soca artiste Voice, he hopes the trend continues.

"In terms of soca, dancehall and reggae, that's how it is in Trinidad. We play a lot of reggae and a lot of dancehall throughout the year. Now we even have the Trinibad movement which is very much dancehall, and then soca is us. That is our culture. So, the mix is nothing new to us. I feel like what's important is having it here in Jamaica as well and across the Caribbean because we are all one people and it is a blessing to see it man," he said.

Trinibad is modelled off the dancehall sound with the only noticeable difference being the accents of the artistes. A notable artiste from the movement is Prince Swanny, with songs such as First Class Flight and Catch 22 which dominated airwaves in Jamaica in 2020. Other Trinibad artistes include Medz Boss, Tafari, Boy Boy and Jahllano. The genre has been on the rise over the last five years but gained most of its regional and international popularity in 2020.