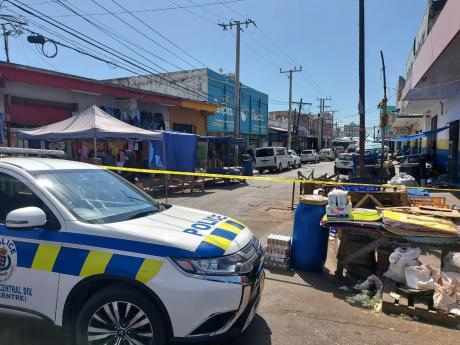 A male vendor who was shot mulitple times Friday morning on Princess Street, in downtown Kingston, has succumbed to his injuries.

The deceased has been identified as 32-year-old Omar 'Bull Rat' Scale, a vendor of Metcalfe Road, Kingston 5.

The Darling Street police has informed THE STAR that the other victim, a female vendor who goes by the alias "Joyce", is currently responsive and recuperating from her wounds. She was shot three times.

Scale, who sold male and female slippers and female underwear, allegedly received several gunshots to his face and torso.

When our news team revisited the area, just outside of the food franchise Kris Krus Limited, the vendors appeared shell-shocked.

A female vendor, who only identified herself as 'Slimmas', said the mood on the ground had been dampened since the incident took place.

'Bull Rat' was remembered by his peers as hard working.

"Mi no know if him ina problems a him yard but dung yah him only interested in him goods dem. Him just sell and go home," the hairstylist said.

Scale is survived by three children.