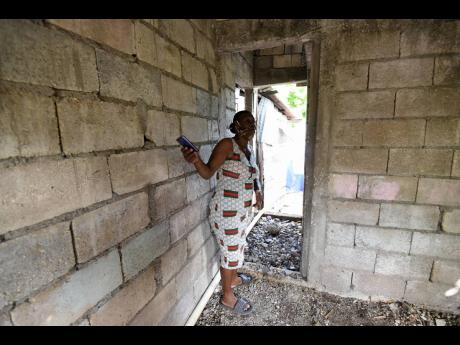 Smith is appealing for assistance to finish this house that she is forced to sleep in whenever her current dwelling leaks profusely. 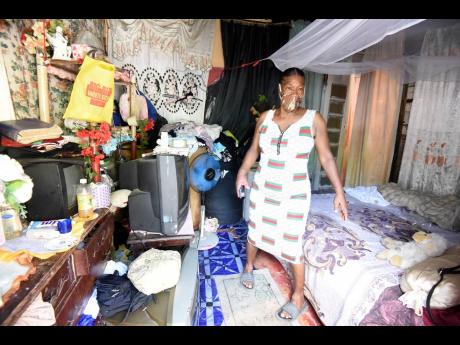 Viviene Smith, shows her bedroom that gets wet whenever it rains due to a leaky roof. 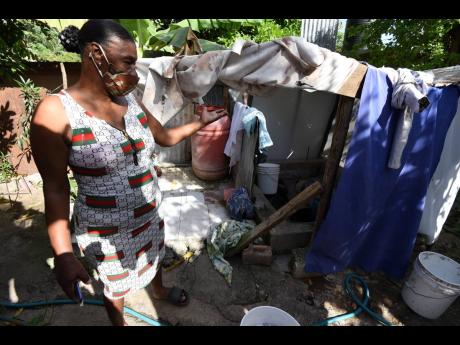 Smith shows her makeshift bathroom and toilet, which have drawn the ire of her neighbours.
1
2
3

Last Friday was far from being a happy 60th birthday for Viviene Smith.

The sickly grandmother is desperate to move out of the place she has called home for the past three decades because of its deplorable condition.

"The conditions here are very bad," she said, as she pointed to the dilapidated structure in Windsor Heights, Central Village, St Catherine that she shares with her two grandchildren.

There are massive holes in the mostly board floors. The tarpaulin on top of her zinc roof is worn, which leads to flooding during rainfall.

The makeshift bathroom, located outside the dwelling, has been a nuisance for her neighbours who regularly complain about the stench which permeates the air.

When the roof leaks too much, Smith and her grandchildren are forced to seek shelter inside an abandoned building beside her board dwelling. The building, according to her, was meant to be her new home from 2003. But because of sickness, unemployment, and a lack of support, she has been unable to finish it.

Her impoverished condition is only made worse by her deteriorating health. She suffers from high blood pressure, glaucoma and an ailing heart.

"I have been sickly, diagnosed with rheumatic heart disease, which prevents me from doing a lot of stuff. I used to hustle and sell stuff in order to take care of myself and my grandchildren. I also used to clean the streets but since the death of the person in charge of that programme, I have to rely on the goodwill of people," she said.

The struggling mother of five told THE STAR that she only receives a modicum of support from her children.

"They don't really have it. I have one son in America, but from he left Jamaica he hasn't given me much. Sometimes it's months before I can get him whenever I call," she said.

Smith disclosed that she has sought help from several charitable organisations including Food For The Poor, which she said has donated food, but has yet to respond to a letter requesting assistance to complete the house.

"I asked them for some two-by-four wood, zinc and a toilet bowl but they haven't responded," she said. Smith said she also needs sand, gravel, cement and steel to resume construction. She is also requesting help for her grandson, who needs a tablet for school.

"They (her grandchildren) help me out a lot. Because of the heart condition, I am always fainting so I need them to move around better," she said.