Winston fashioning a life out of metals 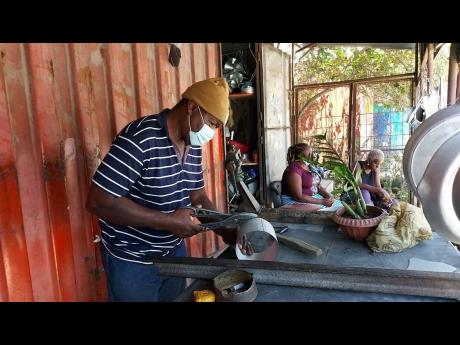 Roderick Frazer sent is children to school by being a tinsmith. He said that his last child is currently attending the University of Technology, Jamaica. 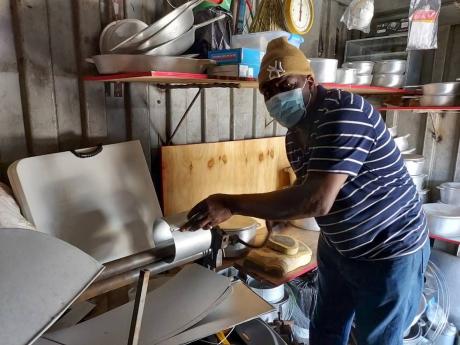 Roderick 'Winston' Frazer says he has experienced more than enough scary moments to walk away from his job as a tinsmith in downtown Kingston, where he makes and repairs things made of tin or other light metals.

But the 64-year-old admits to still being in love with the trade he was introduced to some 43 years ago.

"Yah so was a ghost town one time, enuh. Nobody never wah come yah so, tru di constant war weh did a gwan," said the veteran craftsman, who operates his business on Pechon Street, directly across from the UDC Car Park.

He recalled an experience in the early 2000s when rival gangs from two Kingston communities traded gunfire for several hours.

The father of seven said that he was always mindful of the risks, but securing his children's education was paramount in his list of priorities.

"Mi never know say mi would a live to see today because of the amount of pressure mi put on myself fi dis work. But mi come from a loving family and weh mi do comes from love, so that mek it easy. Now things different from when mi just start 'cause the youth dem get older now, so mi can put dung a likkle savings," he said.

Frazer said he did not receive formal education beyond the secondary level, and was working as a mason when his uncle introduced him to working with tin.

"Di minute mi uncle show me how it go, mi decide say a this mi wah do. Mi never looked back since," Frazer said. From learning to make savings pans to measuring instruments, scoops, scales and graters, Frazer said he is still excited about crafting raw materials into functional tools.

This is what gave me everything. My children are big now, and I feel good to know that I was able to send them to school; even the last one who is currently attending the University of Technology, Jamaica," he said. According to Frazer, he and other tinsmiths are vital to the economy as they produce items which they sell to other vendors, who, in turn, sell them to customers.

With a steady demand for his products, Frazer at times hires a deputy.

"I have to give thanks, because I started out working for someone. But mi tell mi self say mi cyah work for anyone. Mi stick to it even today, and see mi now able fi hire now and then," he said.