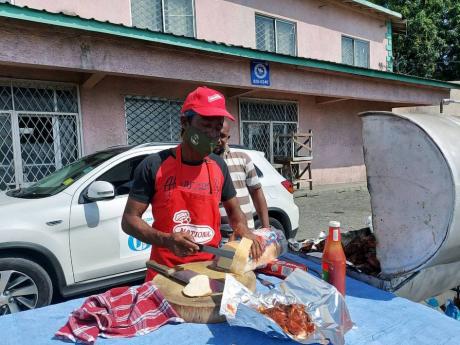 Marvin prepares an order for a client. 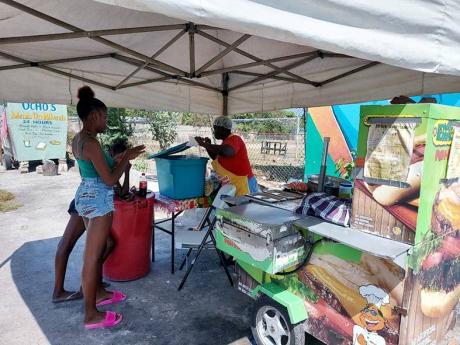 Customers wait to be served by Lala at her burger tent.
1
2

Pan chicken operators within the Corporate Area have welcomed a proposal put forward by Prime Minister Andrew Holness which could see them having their food orders delivered to their customers.

The livelihoods of street vendors who do their businesses mostly at nights have been significantly affected because of the curfew orders imposed by the Government in an attempt to stem the spread of COVID-19. The islandwide curfew remains at 8 p.m. to 5 a.m. daily at least until March 22.

"Mi affi come out earlier so mi get enough hours, but is mostly on a weekend mi can see mi way out. So this might just work out well," said Lala, who sells burgers and sandwiches along Olympic Way. Acknowledging the importance of the quick service operators even in his own constituency, Holness, during a digital press briefing on Sunday, promised that he would sit with stakeholders in the private sector to find a solution.

"The thing is wi no have the thing fi do the delivery. So if Anju (Holness) can even cover that then it would be even better. Mi have customers all over, from Montego Bay, Westmoreland, St Elizabeth, dem call mi when dem a come in," said Marvin, who has been selling jerk chicken for 20 years along Red Hills Road.

"It could a worst, enuh, but wi affi give thanks. Before COVID mi used to go up to like two, three o'clock. But now fi affi start early and done early," he said. "A lot of people know 'bout the curfew so dem come out early, but then yuh have some wait until the appointed time (curfew hours) and then come out. Because of that, wi cyah get fi deal wid everyone at the same time so the delivery thing would be good." Lindy, another jerk chicken vendor who also sells a variety of beverages, said she would prefer more hours. "But based on how Corona a gwan right now, wi affi work wid the time Anju gi wi. Di whole a wi a human being so wi affi give and take, yuh understand? So wi just affi do the right thing until everything go back a square one," she said. As of yesterday, Jamaica has recorded 23,599 confirmed cases with 425 deaths and 13,502 recoveries.