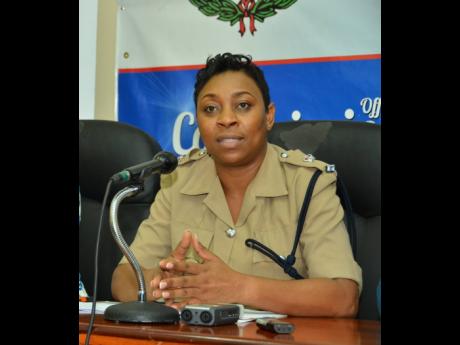 Senior Superintendent of Police Stephanie Lindsay says the police constable seen in a viral video in a compromising position on social media could be dismissed from the Jamaica Constabulary Force (JCF).

"That would be a decision for the commissioner to make. But it (penalties) can range from many things. (The cop) could be severely reprimanded, (could be) charged for days' pay or be discharged from the force," Lindsay told THE STAR.

Lindsay said the lawman's fate would be determined following results of an ongoing internal investigation by the Inspectorate and Professional Standards Oversight Bureau, the arm of the JCF responsible for investigations into police misconduct.

"The arm has commenced an investigation and they are going to check to see if the conduct we have seen, and the circumstances surrounding the video, can bring the organisation into disrepute, among other things," said Lindsay.

The constable, who Lindsay confirmed is currently assigned to Portland, is at the centre of a social-media frenzy after video footage of him surfaced online performing oral sex on a woman while still in his uniform. Yesterday, Police Commissioner Major General Antony Anderson ordered that the policeman be placed on interdiction as an investigation gets under way.

A colleague told THE STAR that the distraught cop has not been doing well. He said he does not believe his actions warrant dismissal.

"The only problem that me see is that him deh ina him uniform, so people will see it as him being on duty. Him cyah get no big lick fi it still, dem just a pull him off duty fi see weh him headspace deh," the policeman said.