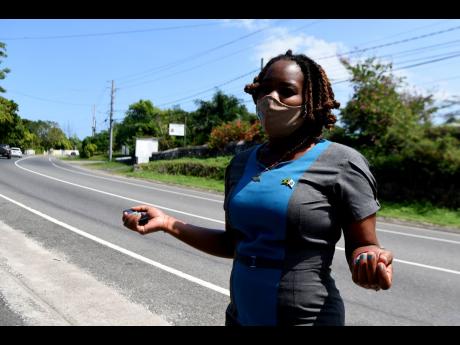 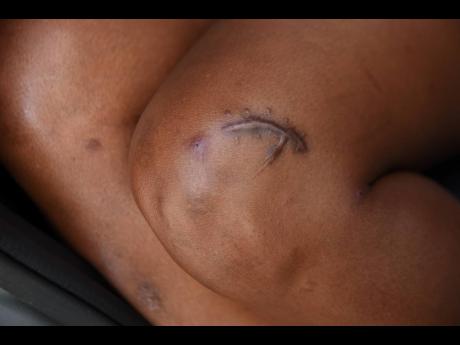 Richards shows some of the scars from injuries to her legs. 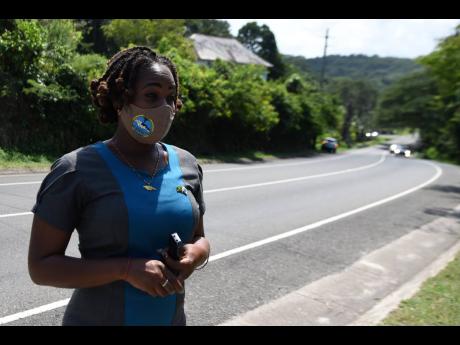 Richards said she hopes her story will motivate others.
1
2
3

March 6 marks a year since Monique Richards, 30, came face to face with death.

She was cruising steadily along the Boscobel main road in St Mary sometime after midnight when the driver of a white Toyota Probox motor car reportedly failed to negotiate a turn and collided head-on with the white Toyota Axio she was driving. The Probox driver was pronounced dead at hospital, while Richards received life-threatening injuries to the head and abdomen.

"I am so nervous right now," she said, as she stood in the spot where the accident occurred on Wednesday, replaying the events in her mind.

"The night in question, I was coming in from Ocho Rios. I went to collect a car with my cousin, who owns this car rental service. So when we were coming back to Galina, where I live, I asked my cousin to go in front, because I was driving in front initially," she told THE WEEKEND STAR.

"I remembered after passing Beaches Boscobel Hotel there was this long, white wall and the light from the car that was coming towards me was very bright, so I had to glance over to the wall. When I woke up, I was now in the back of my cousin's car and I told him that I wanted to pee. He then said I should 'go ahead', but I said to him 'I cannot pee in your car'."

Slowly the reality kicked in. Richards was laying down, covered in blood and was suffering from excruciating pain, a result of the crash she did not remember.

"I still didn't know at this point in time what had actually happened to my body, but I felt everything going down and I was like telling myself, 'Okay, just calm down.' When I reached the Annotto Bay Hospital I remember being in the theatre, but it was only a couple days later, when I woke up, [that] I realised what had happened," she said. "I was in excruciating pain; the muscles were removed from my abdominal walls. I had internal bleeding, small intestines were damaged. Also, my right femur was fractured and I was unable to see out of one eye."

Richards said she was bedridden for 16 days, and in three months, she was walking again. Doctors told her that she was lucky to be alive, much less to be even walking again. But Richards, who works at the St Mary Health Department as a health promotions and education officer, admitted that many physical and emotional scars remain.

"There are times when I am driving alone and I don't feel comfortable, because I just feel like anything bad can happen," Richards said. "A lot of accidents have occurred on this road, so in my head this is a haunted space." Richards, who is pursuing a master's in anthropology at The University of the West Indies, Mona, said she has been using her experience as a motivation not just for herself, but also her nine-year-old son Khalel and others.

"I was not supposed to be here because persons have met in similar, if not little less, motor car accidents and did not make it. I started driving back in April because I know that I have work, and my son to take care of," she said. "I cannot use this setback as an excuse. I feel like I have a purpose, and so I am living by the goals that I have set for myself before the accident. The accident has given me that push to say it is time for me to complete them."