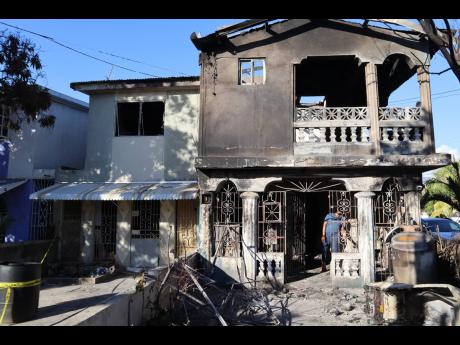 The two houses that were damaged in Friday’s fire. 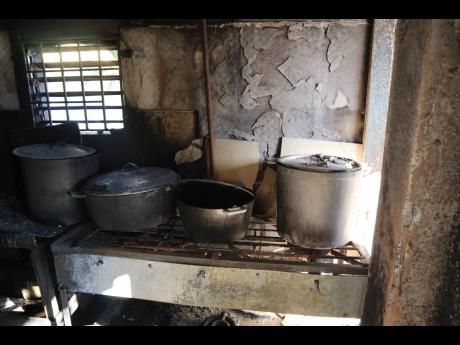 Gracie lost various appliances and pieces of equipment in the blaze.
1
2

Alcian Gracie is still trying to come to terms with the fire that gutted her home-based restaurant last Friday.

"I don't know what to feel right now," said Gracie, known as 'Karen' to the people in Coorevillle Gardens, St Andrew. It is reported that a truck was delivering cooking gas to the business when a hose began to leak. A fire soon broke out and spread rapidly.

The 41-year-old businesswoman said she was at the nearby Boulevard Shopping Centre when her mother called bearing the bad news.

"She said 'Karen, di house a ketch a fire'. When I came here, basically, the whole front was on fire including the other two houses," Gracie said. For more than an hour, it took four fire trucks and countless buckets of water to try and put out the angry fire. Hands on her head, Gracie estimated that her losses could be about $10 million.

"I saved basically nothing. Also, I heard that three bedrooms were damaged but they (neighbours) said not much damage done to downstairs," she said. "Here, I have seven bedrooms and basically four of them got damaged to a point of no repair."

Gracie said that she feels responsible, despite not being there when the fire started, and even though she has been running her business incident-free for the past nine years on her veranda.

"Mi could a lose my entire family and my neighbours. Everything! A dat mi a worry 'bout di most, especially my neighbours," she said. Gracie said she visited the two men who received burns in the fire at the Kingston Public Hospital.

"The gas truck worker who was delivering the gas has burn marks on his hands, as well as my uncle who got burned badly trying to get things from out the house during the fire," she said.

Gracie said that she has been finding it hard to sleep, and admitted it is going to be hard to start over.

"But my friends and family have been calling and saying that they will try and help in whatever way they can. I guess with their help, it's going to be a little easier picking up back the pieces. I am just happy that I never had any customer at the time, only one was there," she added.