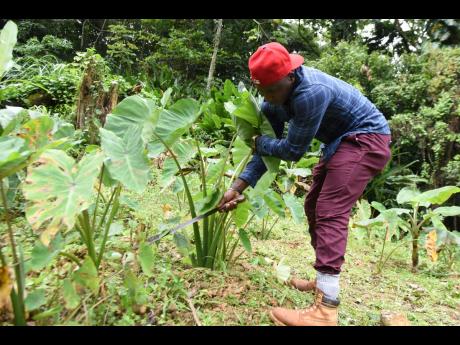 Cavan does some work on the farm. 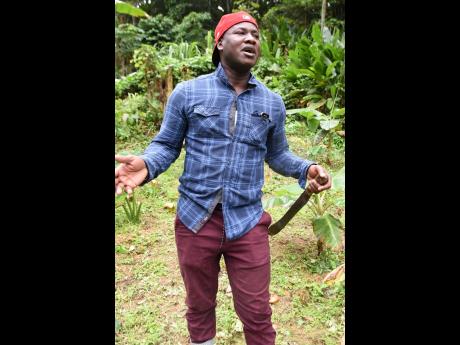 Cavan, who won the first season of the Digicel Rising Stars competition in 2004, says he has found another occupational passion in farming.

"I have always been connected to nature and it's a way, for me, to get in touch with God," said Cavan, standing atop his aunt's two-acre plot in Port Antonio, Portland.

On the farm, Cavan said that he helps his aunt, Sharon Farr, to cultivate crops like plantain, banana, dasheen, pumpkin, pak choi, sugar cane and ginger.

Although admitting that farming is not seen as an attractive vocation for young people, and certainly not for a musician, the 38-year-old said that he is loving the experience so far and is also encouraging young people to give it a try.

"It (farming) is a necessity, food is a need. No matter what you do or wherever you are, you are always going to need food. Even if you don't want to sell food, have a little garden and put one little tomato in it, a little sweet pepper," advised Cavan, who fathers three boys.

Cavan, given name Winston Lewis, also believes that with greater emphasis now being placed on living healthier due to the ongoing pandemic, producing your own food could be a viable route to ensure you live a healthier lifestyle.

"Because of this COVID thing yah, di ginger a one of the main thing dem right now fi use. Then you have the garlic and fever grass weh a grow wild all over the place. Nuff people no understand, even the bamboo good," he said. "Wah day mi feel a likkle weak ina mi self and mi say 'no man, dis cyah work' so mi go get some bamboo. Di same bamboo leaf, mi use it wid di ginger and fever grass and boil dem and in quick quick time, mi feel good again."

On Digicel Rising Stars, Cavan quickly endeared himself to the Jamaican population, and convincingly won with original pieces such as Pain and Girl of My Dreams. Now a devoted Christian, he said he has been enjoying life and family with wife Tariea, to whom he has been married for 10 years.

While he has not yet gone out to sell the crops that he helps to produce, he said that he is looking forward to seeing how the public will react when they see him operating as a vendor.

"Mi auntie mostly do di selling. When wi load up the van a she go out deh and sell the goods, but she always tell mi bout the reactions she get from people who know; maybe mi need fi go and get that feeling for myself," he said jokingly.

But farming, Cavan added, is as challenging as music. However, the former Port Antonio High student told THE WEEKEND STAR that he is determined to be successful, as he is looking to forge ties with the Rural Agricultural Development Authority. But that's not all on his mind. Having spent close to five years working with a popular cruise ship liner, Cavan said he has a few business ideas that he would have explored already, had it not been for the social restrictions caused by COVID-19.

"In a Portland mi no really see no great hiking. Big waterfront right yah so weh mi live in front us. Mi can get some jet ski and run some trips go Winifred (Beach) so people can come in and enjoy," he said.