Vendor killed metres from her gate 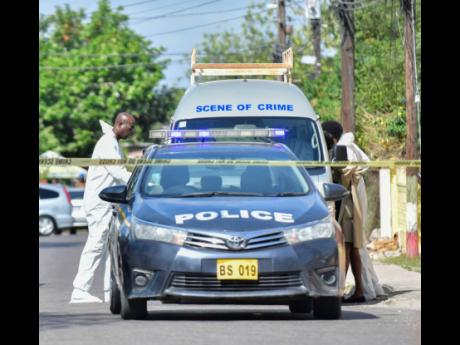 Okeitha Lettman shared a smile with her younger sister just moments before she was killed, metres from her gate, in a drive-by shooting in Southside, Kingston.

Lettman, 52, a clothes vendor, has been described by her siblings as fun-loving. "How di last thing me and mi sister share fi be a smile?" asked her grief-stricken sister Shauna, as the tears began to flow. Lettman, mother of two, was also remembered as an industrious person, who was willing to go the extra mile for anyone who needed help.

"She born as an entrepreneur. She sell anything, only thing she never sell is her body. She always a help people and mi no know nobody who kind like her," Shauna said. "She would buy a bubble gum and share it with who deh round har. Mi sister only send love to people."

According to the Kingston Central police, around 9 a.m. on Tuesday, Lettman and other persons were conversing along Barry Street when a black Toyota Wish motor car drove up to them. An armed man alighted from it and opened fire at them. The carnage also took the life of 29-year-old labourer Roshane Thomas, who was shot in the head and upper body. Another woman was shot in the thighs. Cherry, another of Lettman's siblings, said that her sister got an unjust death.

"Mi and har just done talk di mawnin when it happen. She did a eat a plate a salt mackerel and dumpling. By time mi reach a my yard, mi get call say she get shot. She no deserve this at all. She wasn't a Christian, but she prayed hard. Monday night when mi go link har she a write down some gospel songs weh she wah download pon a CD," Cherry said.

Some residents told THE STAR that the area is very tense. "Round yah so? Yuh affi see, and play blind," said a nervous corner shop operator. The area has been plagued recently by the activities of rival gangs. In recent weeks, there have been reports of several drive-by incidents.