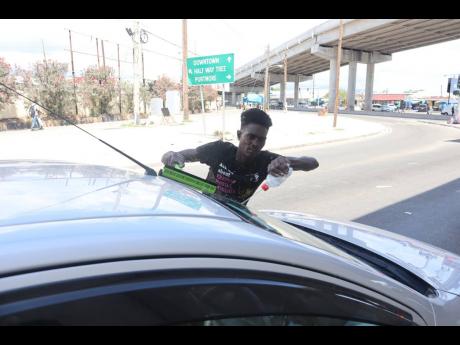 Solomon wipes the windscreen of a motorist. 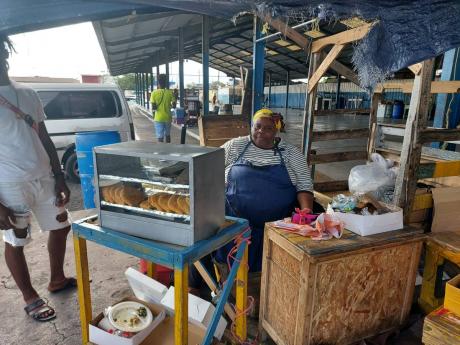 Mama has been a vendor for about 30 years. 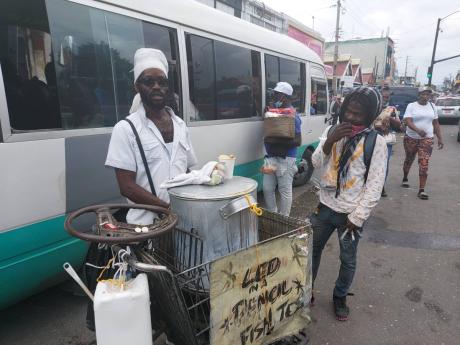 Several street vendors and windscreen wipers who ply their trades in the Corporate Area have expressed dissatisfaction with the Government's decision to close business operations by noon on Fridays for the next three weeks.

Jamaica has recorded a staggering 101 deaths from COVID-19 in the first 20 days of March. Prime Minister Andrew Holness, addressing a Jamaica House press briefing on Sunday, said that weekend lockdowns would run from noon on Saturdays to Mondays at 5 a.m.

It means that these measures will negatively affect small business operators who rely heavily on public movement.

"Total madness, di prime minister could a do better. What about di hustler, weh no have job fi pay dem when dem cyah get fi go work? Friday and Saturday a di best days fi wi mek a dollar," said Mama, a food vendor operating inside the Waterhouse bus park on Pechon Street in downtown Kingston.

"I would put the curfew at 5 p.m. if mi was Anju. That would give di street vendor dem a chance fi mek a likkle change. Di big business dem can manage a three-week break. Some a wi cyah manage three days in the week much less pon weekend," she added.

Many of these operators, particularly in the food sector, act as sub franchisers for larger corporations, something Mama feels should have been taken into consideration.

"Di prime minister fi know say him rich friend dem rely on us also. For example, a over a decade now mi a buy and sell patties from Tastee. Yuh know how much people like me do it?" she said.

Holness said that persons who violate the orders would be prosecuted, but essential service workers would be allowed to operate, including farmers and fisherfolk. The measures have disgruntled many in the labour field, like the formally unemployed men who wipe windscreens for a living.

"It a go stop my food cause a yah so my main hustle deh. When mi can go pon a construction site one time, that cyah gwan again because things slow up big time since COVID start last year," remarked 39-year-old Solomon, who wipes windscreens under the Three Miles overpass in St Andrew.

The country recorded three new COVID deaths on Sunday, pushing the tally to 536. Jamaica has recorded 35,896 confirmed cases. Health Minister Dr Christopher Tufton said that 84 per cent or more of the isolation capacity of the country's hospitals has been taken up. The virus has been lethal with persons over age 60.

Leg President, a soup vendor who patrols West Parade in downtown Kingston, said the virus has been a source of pain for everyone. He also said that he thinks Holness could have exercised more consideration for the poor despite the COVID numbers.

"This thing yah a break down people physically, mentally, emotionally and financially. Poor people hardly can afford one pound a flour, how wi a go manage fi lock in pon days weh wi can hustle the most and put on a pot?" he asked.