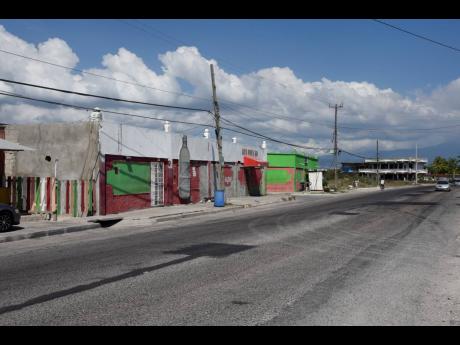 Commercial sex workers along the busy Port Henderson Road in Portmore, St Catherine, are asking Prime Minister Andrew Holness for an extension to the curfew hours.

As part of measures to contain the spread of COVID-19, Holness announced three weekends of lockdowns across the island. However, several of the workers, whose occupation relies heavily on public movement, told THE WEEKEND STAR that the restrictions have hit them hard financially.

"Wi a suffer! Tell 'Bro Gad' (Holness) say wi a beg him some extra hours. So like him put the night-time curfew a 8 o'clock, wi a beg him fi allow wi fi work up 'til midnight the latest," said Blackie, who has been working on the popular stretch known as 'Back Road' for the past five years.

The sex workers said that the first weekend lockdown caused a massive dip in earnings, and they are having trouble keeping up with their bills. They say that finding rent money for the motels they often use to conduct business has also been difficult.

"It did already bad wid di night-time curfew, so yuh can just imagine weh wi a face wid di weekend lockdown. From Friday a only one customer mi get," added Blackie.

Some of the workers said that they would return home until the lockdown measures ease up while others, like Samantha, have challenged the Government to put measures in place to protect them from the economic fallout given how vital their services are to society.

The 27-year-old single mother of three also said that prostitution should be recognised and treated as an essential service.

"No matter how society wah look down on us, dem need wi. A nuff people wi help. Our work is vital. If wi fi tell di media how much top-notch people come to wi a night-time unuh wouldn't believe wi," she said. The sex workers are not the only ones feeling the pinch. Ms Shelly, who does laundry for the night-time workers, is also sad.