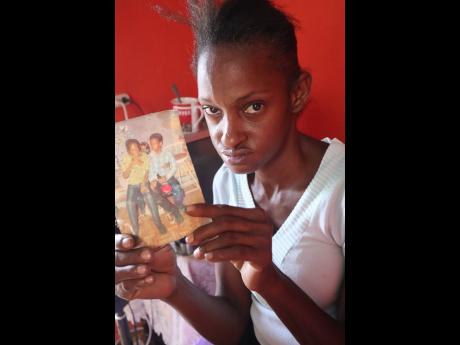 A distraught Stacy Ann Holgate said she does not know if she will overcome the pain of losing her first-born son Daniel Spencer, whom she said was a 'pleasant boy'.

The 18-year-old, said to be mentally challenged, was killed execution style on Saturday, April 3, in Franklin Town, Kingston. According to the police, Spencer was fatally shot at the intersection of Upper Sommerset Avenue and Victoria Avenue.

"Mi a feel some pain right now weh mi cyah explain. Daniel gone!" Holgate told THE STAR at her home. She added that Daniel had high hopes of taking her and his brother out of poverty.

"A mi breadwinner that! Mi no know weh mi ago do, mi no know how mi ago manage. Cause today now, before him leave out ina di mawnin him would a say 'Mummy see a three bills yah. Buy sup'n fi you and mi bredda eat'. Him always tell mi say him ago tek mi out a here," she said.

Holgate said when a neighbour informed her about her son's death, she immediately felt a shift in her abdomen.

"Yuh see from Saturday, mi no sleep. Mi no have feeling fi food or anything. Mi love him to the ground him walk pon, how dem fi do that to the likkle bwoy? Dem is a wicked!" she cried. "Sunday when mi hear say mi yute dead, a right up deh mi go. A one yute draw mi back and tell mi say mi cyah go up deh."

Outraged residents of Dunkirk in east Kingston are adamant that Daniel did not deserve to die like that. Marcia Gayle, who is a neighbour and family friend, said that Daniel would often walk to sell chocolate "because him affi bring home something for his mother and brother". "And when him down to the last one in the box, him bring it back home for his brother," she said.

Superintendent Tomielee Chambers, commanding officer for the Kingston East police, told THE STAR that the lawmen would be increasing their presence in order to control the possibility of a flare-up.

"We have already visited the community to speak with the citizens there to build on the relationships we have been working on since last year when the conflicts would have started," Chambers said.