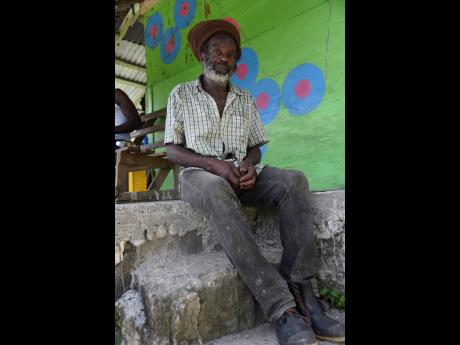 Keith McGibbon chats about the volcano from the steps of his shop. 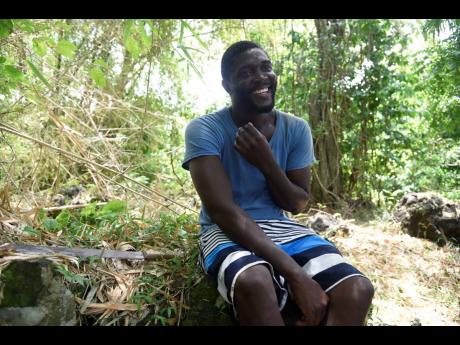 Farmer Adrian Chambers said the soil is good for any crop. 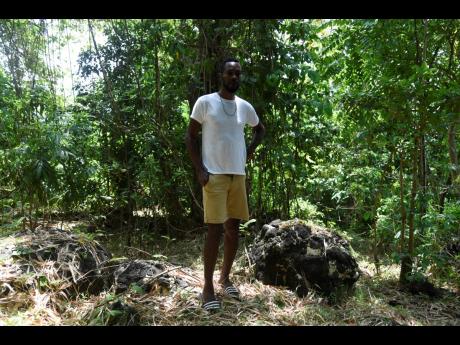 George Pink stands on top of the dormant volcano in the Black Hill area of Portland.
1
2
3

Living on a dormant volcano, the people of Rodney Hall district in Black Hill, Portland, are listening and watching intently the tragedy unfolding in St Vincent and the Grenadines.

Last Friday, the La Soufriere volcano erupted for the first time since 1979, blanketing the territory and surrounding islands in ash and forcing more than 16,000 people to evacuate. Smaller explosions have continued over the past few days, prompting emergency officials to describe the landscape as a battle zone. The news have rocked the entire Caribbean, serving as a fearful reminder to some residents of Rodney Hall.

Keith McGibbon, 65, a well-respected farmer and fisherman in Rodney Hall, told THE WEEKEND STAR that events in St Vincent have somewhat rekindled memories.

"Some a dem scared because ina di 70s the hill would ketch a fire sometimes. We used to have some terrible sun heat and the hill ketch a fire so dem a say a limestone," he said. "It mek wi feel a way because it is a dangerous thing happening to them over there. Nuff time wi still affi think a certain way especially when the sun well hot and wi a look pon di distance and say how high the mud ago fall from if the volcano erupt. But then afterwards that feeling pass and wi move along again."

Although legend says the volcano erupted long before this quiet community was developed, some still believe that it could become active again.

"Wi cyah really feel dah way deh, but because we know say is a terrible thing going on a St Vincent, wi affi think anything. We heard that in some earlier century dis one exploded and that is why the stone dem is black. Dem deh all bout the place," McGibbon said.

THE WEEKEND STAR journeyed to the centre of the volcano. That tour was facilitated by farmers Adrian Chambers, 36, and George Pink, 41. They plant drought resistant crops such as pumpkin and watermelon atop the volcano.

Pink is one of several residents who has lost fascination with the volcano.

"If people no bring it back to yuh attention, yuh no really member it and like wah gwan ina St Vincent yah now. If you guys never come here wi wouldn't member it. Wi no have no fear over it either because from wi born wi never see anything to mek wi feel like it ago erupt," he said. But Pink is surprised by reports that some Vincentians are reluctant to evacuate their homes.

"Mi rather mi life. Maybe they got attached to the material things weh dem gain over time, but wah gone can always get back. When yuh life gone a it that. It all depends on what you value!" he said. According to the men, there has been an influx of people visiting the site, including geologists, college students and tourists, all wanting an up close view.

"Wi like the idea of having the only known volcano on the island," he said. Chambers, who trod effortlessly during our 15-minute climb, said any crops planted in the soil do well. "I've been up here for two years now and it is a wonderful experience. All mi can say, when mi come up here mi feel relaxed. Yuh no see people and yuh get the best cool breeze fi enjoy," said Chambers.