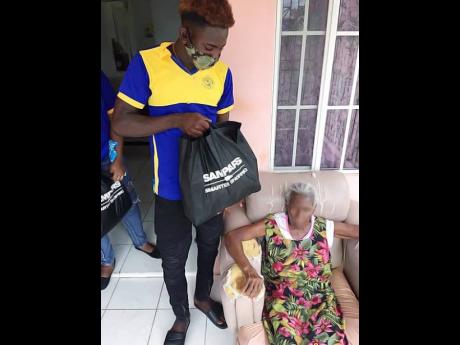 Kevaughn Salmon distributing care packages on behalf of Hayes Police Youth Club last year. He was among three persons who died as a result of Saturday’s crash. 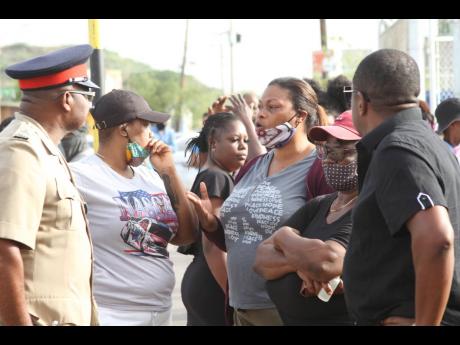 These persons get the ears of a senior policeman as they protest an incident that led to the deaths of three youngsters and the injuring of five others in Lionel Town, Clarendon.
1
2

Five members of the Hayes Police Youth Club in Clarendon were among nine passengers involved in Saturday night's crash, which has sparked controversy and protests. Three members, 17-year-olds Janoy Blair and Dante Johnson, and 20-year-old Kevaughn Salmon, have since died. Two other club members, Dantae Witter and Rujay Harvey, both 18-year-olds, remain in hospital.

Kim Berlin, president of the club, said members have been badly shaken.

"Persons from our club family have lost sleep and are experiencing diet changes, it's just sad. We have been broken down mentally, we are really broken. I could depend on these young men to carry out assigned task without hesitation," Berlin said.

"These young men were active members of this noble movement and members of the netball and football teams. We have worked on many projects together. We are not just a club; we are a group of strong-bonded people who came together to create our own family," she added.

Salmon, who was the driver of the vehicle, served as the club's sports coordinator. Berlin asserts that he was the life of the party, who kept every one happy with his jovial demeanour.

"He was passionate about his community and loved to see young people strive for success. He was a natural leader and was always driven. He was also one of the club's entertainers. There was never a dull moment when he was around. He knew how to put a smile on our faces," Berlin told THE STAR.

According to Berlin, the youngsters had a knack for charity, and showed no reluctance in serving their community.

"Last year when COVID-19 was spreading across Jamaica, Rujay and Kevaughn took charge of helping the [Clarendon Police] Community Safety and Security Branch to distribute packages in and around the Hayes community to the less fortunate. For them, no community project was out of reach. From attending church services, to the painting of pedestrian crossings and schools, and cleaning and feeding elderly persons, they were always ready to lead," she said.

The Lionel Town incident is now the subject of a probe by the Independent Commission of Investigations (INDECOM). The commission said that preliminary examination of the Nissan AD wagon found a single projectile strike mark at the left door frame. No firearm was reported as recovered from the scene.

Residents have disputed the police version of the events that led to the crash. According to the police, about 8:55 p.m., on Saturday, a team of officers was conducting spot check in the area when they signalled the driver of a Nissan AD Wagon motor car to stop. They said that the driver disobeyed and sped away, causing them to go in search of the vehicle.

The police said that while searching the area they came upon a crash site where several persons converged. On approach of the team, shots were reportedly fired at them, the officers returned fire; however, no one received gunshot injuries.

The police said that when the shooting subsided, eight persons who were identified as occupants of the car were seen with injuries sustained from the crash; they were taken to hospital for treatment. Salmon and Blair were pronounced dead on arrival while the others were treated. Johnson died one day later.

But residents claim that the car was fired on by the cops, causing it to crash. Amid the stand-off, Berlin said the club maintains its mandate of fostering positive relationships between the police and citizens.

"The birth of the Hayes PYC was out of great need to foster and improve the relationships with the police officers and citizens of the Hayes community," she said.

She said her team is encouraged by the support from other police youth clubs across Jamaica, and the police of the Area 3 Division.

While club members remain on tenterhooks as they await news of those hospitalised, she said they are staying positive and hoping for the best, while clinging to memories shared with those who died.

"As a club family we are stronger together, all we can do is live on the memorable moments we shared together," she said.