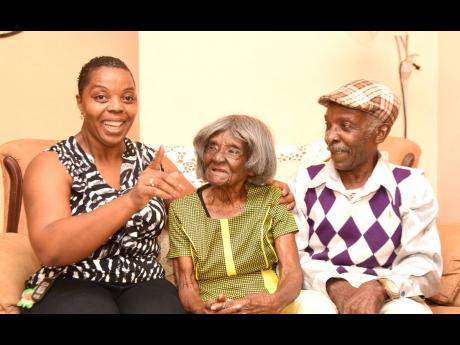 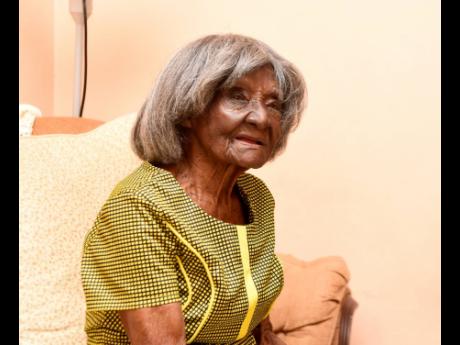 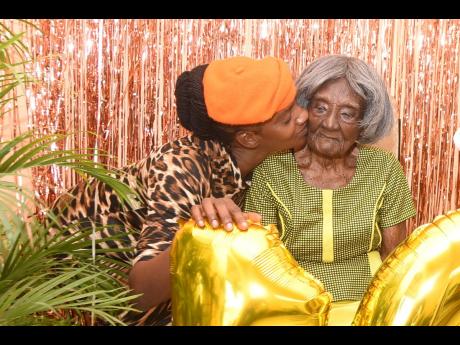 Ivy Allen is a polished woman, and upon seeing THE STAR team at her 105th birthday celebration yesterday, she adjusted her wig, fixed her skirt suit, and posed for pictures.

"Everybody come look fi mi but nobody come give mi nutten fi mi birthday. From di odda day people a come look fi mi like nutten but not a man don't give mi a penny change. Everybody a come with nothing so tan whe yuh deh and nuh badda come because a sumpn mi a look," she said before erupting into a fit of laughter.

A part of Allen's birthday saw her indulging in one of her favourite meals, curried shrimp. She also cracked a few jokes with her eldest child Morris Henry and her granddaughters Sandra Henry and Carla Silvera-Cox.

Allen was born on June 16, 1916 to William and Edith Allen in Woodhall district, Clarendon. She is the second of 11 children.

"When mi younger mi use to love go parties but mi did live a mi madda yard suh mi had to tief out. Mi use to take out mi party clothes and carry dem go coffee piece and hang dem in di tree and mi wait until dem a sleep and leave di back door open and go dance. Sometimes when mi come back home, mi bredda dem lock di door and mi have to beg dem to open it back," she joked.

Allen said she later relocated to Oxford Street in Kingston to live with her aunt and worked as a domestic helper. She gave birth to 11 children, five of whom are alive. She also has multiple grand and great-grandchildren, and says that family is extremely important to her.

"When mi younger, mi nuh too badda with the friend ting so mi never too make anyone come a mi yard. Mi nuh harbour dem, because some a dem too lie and always wah come with some news. So sometimes I used to hear dem a call and mi tell mi children to tell them I am not home," she said.

Allen may not be versed on the current pandemic, but said she remembers the terrors of polio outbreaks locally. She is grateful that she did not contract it but said at that time hospitals were overwhelmed with cases.

"Mi never catch nuh sickness whe come in but mi know a lot of people who catch it," she said. The centenarian appears at least two decades younger, does not suffer from any ailments and is able to walk around the house without any assistance. She credits her longevity to the way she lives.

"Oh my God, mi look young fi true! Probably a because mi nuh wicked because mi see some people a do some tings now and under no circumstances mi can't do it. Mi live and love everybody and deal fair with people. Some a dem people here wicked and love obeah man. Dem love walk a night too much and mi nuh deal with dem people deh or dem pickney. Mi deal with love so God love mi," she said.