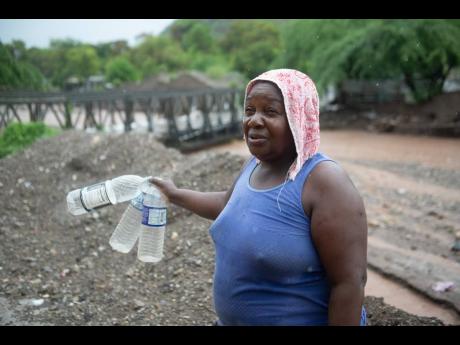 Corrol Jolly looks to fill these plastic bottles with water after two pipes in 11 Miles were damaged by flood waters. 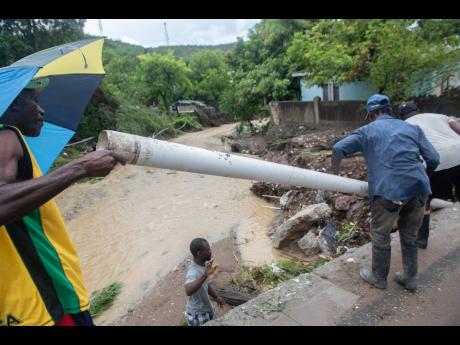 Dozens of homes in Bull Bay, St Andrew, are without running water after two pipes burst, as heavy rains from Tropical Storm Elsa yesterday triggered a torrent of mud and debris.

Corrol Jolly, who lives near to Beach Road in 11 Miles, said that in addition to the lack of water, she is fearful that heavy rains will undermine a bridge leading to the famous Bob Marley Beach. She said also that up until Hurricane Ivan in 2004, she never witnessed flooding from a natural disaster despite the area being flood-prone.

"We are mostly concerned about the gully. We fear if the water comes too hard it will move the bridge. If that happen wi just affi stay on this side of the road until the water dry. When the water buss around the bridge, mi start get concern about right here so. Wi did affi put ladder fi walk round the bridge," said Jolly. Pieces of a broken pipe were scattered along the roadway in another section called Ball Ground, which is several metres away from Jolly's home.

A resident, who gave his name as Dari, said that he fears the lack of running water will negatively affect his goats.

"Is not everybody can afford big water tanks, so mi a hope that the authorities can sort this out quickly. If not mi ago lose big time wid mi business," he said.

A family in Nine Miles had to contend with high water from overnight rains that started on Saturday.

"This morning it was really bad, very very bad. When we came downstairs the water was practically waist height. A lot of items in the shop got damaged, plus we had to take two cars to the nearby police station because they were also flooded out," said Hartence Sharpe. "This is the first time it has been like this. We have water before but not like this magnitude. All the water from the road came over in my yard because dem move di wall fi accommodate the road expansion. Mi caan sleep in peace tonight."

Tropical Storm Elsa is forecast to head towards the Florida Straits today and pass near the Florida Keys early Tuesday.