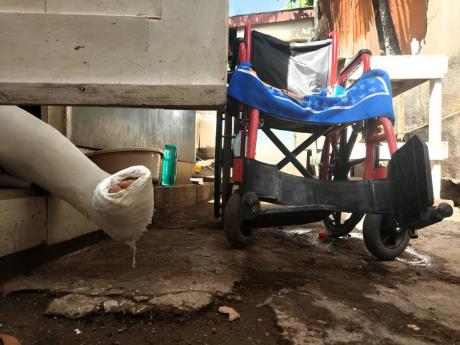 Kay is afraid to go outside since she was caught in the crossfire of a gun battle.

Kay is afraid to leave her house. The 11-year-old was shot in both legs while in her community of Southside, Central Kingston, in May. Her mother says that she is petrified whenever she hears an explosion.

"She is very traumatised because of it," said her mother, Ann, while helping her child out of a wheelchair.

The child was shot three times in both legs as she stood outside of a shop where she had gone to purchase chicken and chips. Her mother was in their house when the shots were fired. She quickly learnt that her baby was hurt during the shooting.

"At first when mi hear mi get frighten, 'cause mi a wonder which part on her body she got shot," he mother said.

It was initially feared that a pin would have had to be inserted in one of Kay's legs for her to be able to walk properly. However, doctors are monitoring the child's progress, and are hopeful that she will not require the pin.

"Next week when she go back to the doctors, dem a guh do an X-ray to see if they [bones] are set. If not, they will have to put on back the cast," the mother said.

While the child appears to be on the mend physically, her mother said that the incident has taken an emotional toll on her.

"Nuff time mi see her a bawl and mi know a tru she a remember what happened. Dis is a serious thing because mi daughter was never like this," the mother added.

Ann said that her child, who enjoyed being on the outside with friends, is forced to adjust to her current situation.

"Sometimes when her friend dem come look fi har, and when dem a walk a go weh, she feel sad because mi know she waah walk and play wid dem also. She is a nice little girl, doing well in school and always have manners. But it seem like she more withdrawn now," the mother said.

Central Kingston has been under the gun for nearly a year, with several persons either killed or injured during shooting incidents. Much of the violence has been linked to the actions of two warring gangs, Darkside and Genasyde, that have been facing off against each other. At least 40 murders and 30 incidence of shootings have been recorded in the police division since the start of the year.

Kay's mother is among the residents of Central Kingston who is tired of the violence.

"Mi feel bad cause dem supme yah fi stop. It no relevant, and mi could a lose mi daughter to it," she said.