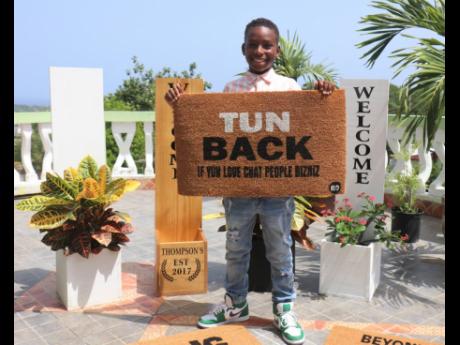 Jahmai Tomblin shows off one of his mats. 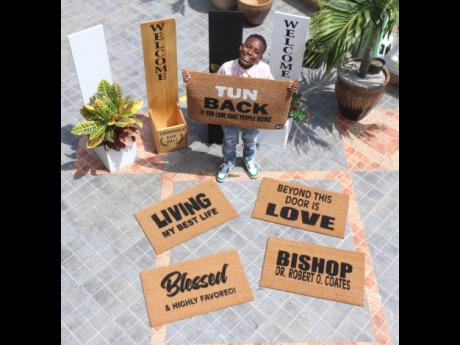 Twelve years old Jahmai Tomblin has taken the plunge into the world of business and entrepreneurship.
1
2

At 12 years old, many children are caught up with the idea of playing games, either outdoors or on devices. However, Jahmai Tomblin's focus is quite different to children in his age group. Rather, it is on his rug and planter box business that he started a year ago.

Tomblin, a Montego Bay, St James youth, acquires mats on which he puts catchy Jamaican sayings before selling them. He is equally hands on with the creation of his planter boxes, which he assembles at his home.

Tomblin told THE STAR that his inspiration to become an entrepreneur came from his mother, Kerrian Shaw, who he has been watching in her business from an early age.

"When I was growing up, she would take me to her business establishment. I would watch how she interviewed and interacted with people. That inspired me because I wanted to be just like her," he said.

"She encouraged me and told me that, if I wanted to start my own business, I should save up my money," he added.

Last year, he decided that it was time for him to take the plunge into the world of business. He drew on the savings he had -- having following his mother's advice -- but it was insufficient for him to start his rug and plant box business.

"I then decided to ask my family and friends for a contribution. When I added all the contributions, it was just smooth sailing after that," Tomblin said.

Shaw is impressed by by her son's commitment to his growing business and his desire to see it expanded.

"As a parent, it is a very fulfilling and exciting experience to watch a 12-year-old who is so driven and always willing to learn. He has always wanted to be a motivational speaker and is always encouraging people from an early age. Growing him as a Christian has guided and directed him on this path he has taken," Shaw said.

The young entrepreneur, meanwhile, told THE STAR that he has been getting positive feedback from his family and friends. He appreciates the support and hopes to make this business even bigger.

"I have been getting a lot of orders and sometimes it can be very tiring, but I love it. Persons will say things like, 'You are such an inspiration', and it is very encouraging," the pree-teen said.

The youngster has plans to sell his merchandise online, pointing out that there is a potentially strong market overseas for his products, particularly the rugs that are embossed with catchy Jamaican sayings. These include: Tun Back If Yuh Love People Business, Wipe Yuh Foot, Living My Best Life, My Blessed Life and Did You Call First?.

"A lot of tourists and people who live abroad love the patois ones," Tomblin said.

He continued: "Since Amazon has allowed Jamaicans to start selling things online, I plan on capitalising on that. I plan on going to big establishments because, the more rugs I sell, the more money I can make. Some people are surprised I have started this business at an early age."

As it pertains to the planter boxes, Tomblin said that "they are very beautiful to have and can compliment items on your verandah, or door steps, just to make it have a buzz".

The 12-year-old had some words of encouragement for anyone who wanted to venture out into their own business.