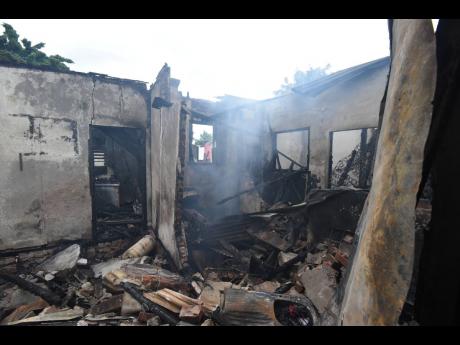 A Kingston family suffered a devastating blow after their house was razed in an early morning blaze yesterday. 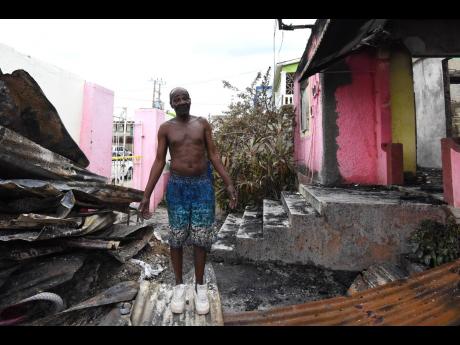 Oscar Palmer stands in the rubble of what used to be his house at East Avenue in Kingston. 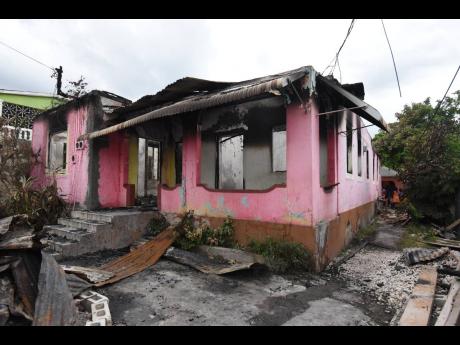 This 12-room house was razed in an early morning fire yesterday. 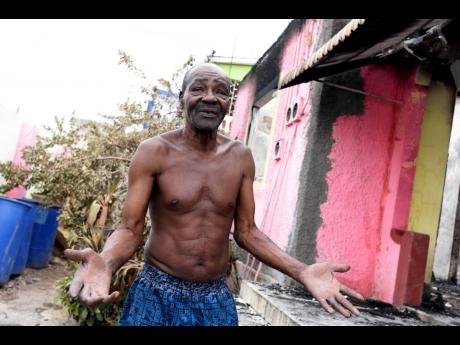 Oscar Palmer recounts the horrors of Tuesday morning when his house was set ablaze, allegedly by gunmen.
1
2
3
4

Eleven residents of East Avenue in downtown Kingston were left cowering in fear as heavily armed men surrounded their home in a before dawn fire which destroyed their 12-bedroom dwelling.

They alleged that the fire, which started just after 3 a.m. yesterday, was the works of arsonists. However, Maldria Jones-Williams, head of the Kingston Central Police Division, said it is too early to determine the circumstances under which the house was burnt.

Julian Davis-Buckle, superintendent at the Jamaica Fire Brigade, said that a call was received at 3:17 a.m. and three units were deployed to the scene from York Park and Rollington Town fire stations.

There were no reports of death or injuries, but the loss was monumental. Yesterday, the victims stared at the broken bricks and burnt furniture and belongings as they reflected on a night of horror.

Oscar Palmer, the patriarch, said he was having a drink with a family member when the gunmen pounced.

"We siddung out on the verandah a drink and we see some boy a come up and dem a seh 'Police! Police! Police!'. So me seh, 'a wah dis'," he recounted.

The man said that the man with whom he was having the drink told him to run as he suspected they were gunmen.

"Me go through the passage door and lock it. And by time me fi lock my door, is a man dat on top of me, and is like dem surround the place. Dem run in my room and light my mattress," the 66-year-old said.

His daughter, Angelica, said that she saw men on bended knees, armed with rifles, waiting for them to exit the burning house.

Palmer said managed to escape by crawling out of the burning house, and doing so without attracting the attention of the men who were allegedly keeping watch. Others, he said, huddled in a section of the house were able to escape because of the quick response of the fire brigade.

"Me a try run but the heat in my face. I had to pull the grille and jump out the window and run outside," Palmer said.

His wife, Doreen, was a picture of despair as she shared with the news team her plans to renovate the family home. She pointed to her recently refurbished kitchen and bathroom and was eager to finish repairs.

"It was actually my grandson come and knock my door and wake me up and said 'Grandma! Grandma! Dem a bun we out and di gunman dem inna di yard and we can't go outside.' Dem swarm the yard, right around the yard. Boy right now, me empty my bank to refurbish house and it bun up. Me have $15,000 in the house and it gone. Me a tell you the truth, me bruk. Me insurance lapse to work on this house. I don't know where to turn right now," she said, shaking her head.

Investigations into the incident are ongoing.