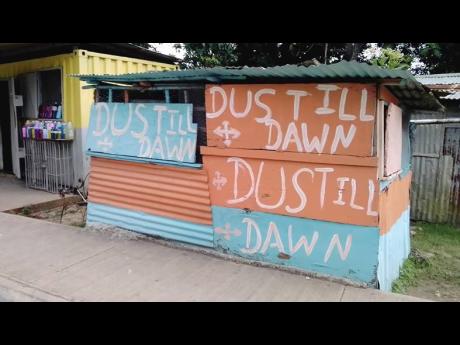 Walford’s blood stained cook shop that was shot up is just feet away from the Kingsvale Police Station in Hanover.

A 37-year-old fast-food vendor and one of his customers were shot and killed just metres from the Kingsvale Police Station in Hanover on Tueday night.

Two other men were shot and injured at another shop operated by Walford at another section of the community. They have been admitted to hospital.

Reports by the police are that about 9:15 p.m. on Tuesday, two armed men travelling on motorcycle rode into the community where they unleashed their mayhem. The gunmen first stopped at an intersection and opened gunfire in the direction of two men. One was hit in the leg and the other received gunshot wounds to the thumb and index finger.

The gunmen reportedly rode off in the direction of Kingsvale main road, and this time they stopped at the dumpling shop where they shot and killed Walford and Vassell.

Members of the community have expressed shock at the brazen nature of the attack. One community member told THE WEEKEND STAR that he had just purchased food from Walford when the gunmen attacked.

"Until now mi can believe seh Harry really dead. Mi seh mi just buy some fried chicken and two fried flour, and by the time mi start walk go up the road and a eat, a pure gunshot mi hear," the resident said.

JodyKaye Johnson, a sister of the slain vendor, said that her brother was a good person in the community, who was only focused on taking care of his children.

"Harry is a peacemaker, him don't trouble nobody, and we are taking it very hard at this time," the woman stated.