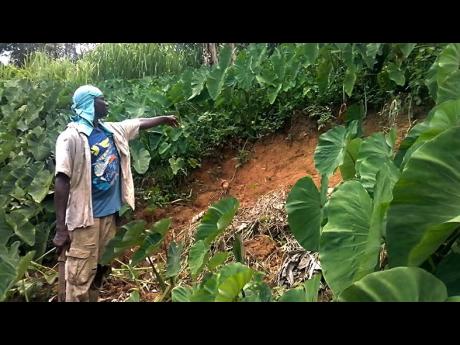 Garnett Poyser shows how a landslide destroyed some of his crops.

Garnett Poyser, a dasheen farmer who resides in Elderslie district, St Elizabeth, is among several farmers affected by the recent flooding and landslides resulting from the passing of Tropical Storms Grace and Ida.

Poyser told THE STAR that several sections of his farm have been seriously affected by landslides, resulting in severe damage.

"Boy, it has been rough for mi. I have been getting landslides and all kinda damage, but I am trying to cope, enuh," Poyser said. "I have been doing this most of my life, and this is not the first time that I have suffered severe damage. But I love farming, believe in farming, and this won't make me give up so easily."

He continued "But as you can see, the land may be gone, but at least I can pick up most of the dasheens and try to replant them. But those that had nearly reached reaping stage, I will just have to see what I can get from them."

Poyser said he has been doing dasheen farming for more than 20 years and this is what takes care of his family. He also told THE STAR that this is the time of year when dasheen reaches its peak in prices, so losing a section of his crop due to landslides is disheartening.

"All my dasheens that you see here, I plant all of them alone, every single hole, and every single plant. As a matter of fact, I have always worked alone, so you can see that it's a very sad case for me to have to be looking at replanting the sections of the farm which have been affected by landslides," he added.

Unable to give an estimate

Poyser said he is unable to give an estimate of the damage that he has suffered over the past two weeks, but is certain it is thousands of dollars.

Last Wednesday, Minister of Agriculture and Fisheries Floyd Green announced that $50 million was allocated to support banana and plantain farmers who were impacted by Tropical Storm Grace. The money will be disbursed through the Banana Board. He informed a virtual press conference that preliminary reports indicated that banana and plantain farmers were the farmers hardest hit by the tropical storm. The minister noted, however, that support will also be provided to other categories of farmers impacted by the recent storm.

"When you look at the percentage loss in relation to vegetables and condiments, most of it is below 10 per cent. When we look at our banana and plantain sector, the loss to the sector is coming out at about 29 per cent," he said.