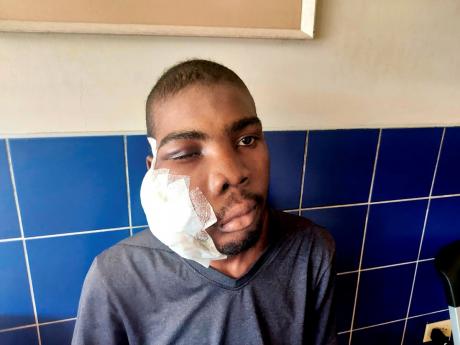 A St Thomas mother and her ailing son are desperately trying to get help to overcome a debilitating medical condition.

Jovayne Bailey, of Springfield, Barking Lodge, St Thomas, has been diagnosed with squamous cell cancer, and requires radiation therapy and surgery. He regularly experiences excruciating pain as a result of his condition. He has a huge swelling on his face, and, as a result, he is unable to see clearly out of his right eye. His hearing has also been affected.

Bailey complained of a toothache last September and was taken to the Isaac Barrant Health Centre in the parish with the hope of having the tooth extracted. However, after several visits to the facility, he was referred to the Kingston Public Hospital where it was established that he had cancer in December 2020.

His mother, Venice Williams, said that she was told by doctors that her son cannot do surgery to remove the tumour until he undergoes radiation therapy. She said that her sister, who resides in the USA, has encouraged her to send him there for treatment. She is trying to get him a medical visa, but has only managed to secure a February 2023 appointment date.

"My sister is trying to get him overseas to get the treatment but the date weh dem gi wi fi come by the embassy is too long. The tumour a mash up him eye because di swelling start a rest pon it. I don't want to lose him," the mother said.

Williams is yet to secure an appointment in a medical facility in the US for her son. She said that while her sister had suggested it as an option, she would gladly seek treatment in Jamaica. However, she has no money.

"If there is anything you can do for my son, I am begging you, please. Even if I have to go on my knees, anything would be helpful. Thank you, I am grateful for anything," Williams said.

She added: "Him father is blind and a mi alone. Sometimes when him get appointment fi go dress him face, mi affi send him alone because mi nuh have it fi pay two bus fares," the distressed mother said.

Bailey, who has hopes of becoming a soldier, told THE STAR that there are times when the severity of the pain has left him immobile.

"Things weh mi could do I can't do anymore. Most of the times mi try fight it but the pain is constant and has mi bedridden sometimes," said Bailey, a former student at St Thomas Technical High School.

"I'm just a cheerful person trying to get back to my normal life, so I can put a smile on faces once more because when they see me, all they feel is sadness and I want that to change. I have a lot of goals in life and would love the chance to try at them," Bailey said.