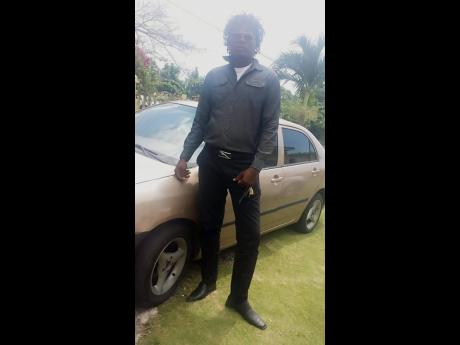 Aeisha Edwards, the sister of taxi operator Shawn Anthony Fennel, who was shot dead by a policeman in downtown Kingston last Thursday, has described her brother as a jovial, hard-working person who was always willing to help.

"I never imagined that my brother would have died this way," she said. Edwards, 43, has vowed that the family will not rest until they get justice.

"He was no criminal, first and foremost. He was a fun-loving brother and an excellent dad. We share the same passion about how unfair certain citizens are treated in this country. We are hoping and will be ensuring that justice will prevail," she said. Reports are that about 11 a.m., Fennel was travelling in the North Parade section of downtown Kingston when a police officer signalled him to stop. Fennel allegedly failed to obey the cop before attempting to use his vehicle to hit the lawman. The cop reportedly then opened fire hitting Fennel and a female passenger. They were then rushed to hospital where Fennel died hours later.

"There is a right way and a wrong way how you do things and not because this has happened close to home, I am going to say that they were wrong. I am not going to say that my brother is a saint. He has run into the law but not to say he killed anyone or thief anything. The most they would have him for is getting ticket for speeding," she said. "I don't believe for one minute that he would hit a policeman even if they have a confrontation. There are a lot of speculation but nothing seems to add up." Edwards said Fennel, who was also a mechanic and truck driver, loved music and used to work with his cousin on a small sound system.

"To be honest, his main goal was to acquire his own place and have several cars on the road operating taxi. He also wanted to open his own garage. But most of all, he wanted to ensure that his daughter excelled in school the way he didn't," she said. Fennel's eldest child, Shaniah, 17, described him as a very good dad who, though he was strict, loved her.

"We didn't see eye to eye on certain things but he was always there for me," she said. "The last time we spoke was my last day of CXC exams and I called him to talk to him about my graduation pictures." After telling him she loved him, Shaniah said he congratulated her and she hung up the phone. "That was the last conversation we had."

Shaniah said she does not know if she will be able to overcome losing her father.

"Every time I see it on social media and when others see me and say 'That is the taxi man's daughter who the police killed', it just reopens my wound," she said. "He was always there to ensure I pay attention to my schoolwork because I tend to be on my phone a lot. But he was always pleased with my reports."

Edwards said that she called the Independent Commission of Investigations but was only told that the body is doing its investigation.