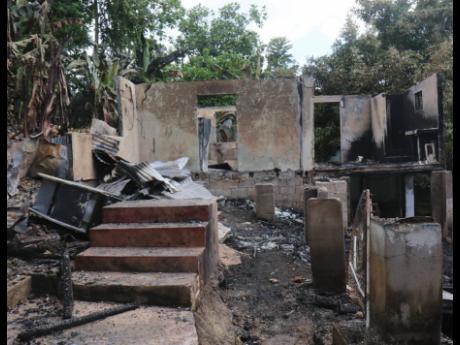 These houses were set ablaze in Granville, St. James, by hoodlums. 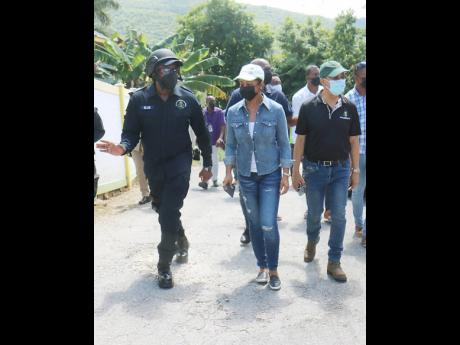 A St James family getting ready to bury a family member on Wednesday now finds itself in the position where a second burial must be planned. This is as a result of yesterday's murder of Osane Brown, 30, otherwise called Nico, of Gunns Drive in Granville, St James.

Police reports indicate that shortly after 1 a.m., men armed with high-powered weapons went to a yard in Gunns Drive where they opened fire hitting Osane Brown multiple times. The 30-year-old Brown ran from the scene and sought refuge in a neighbour's house, where he died.

The gunmen then set fire to Brown's house before leaving. The blaze spread to two adjoining units, one of which was occupied by Bucknor. He was burnt to death after being trapped inside.

One of Brown's sister told THE STAR that her family has been struck with a series of tragedies since the last two years.

National Security Minister, Dr Horace Chang, and Member of Parliament for the area, Marlene Malahoo Forte, who visited the scene, said it is clear that the attack was well-planned.

"Although it was designed to take the police off guard, they were very near, because they were here in Granville and they responded almost immediately, but at that hour in the morning, with the darkness, and men with high-powered weapons, and the police had to be careful how they engaged them," Chang said.

Malahoo Forte noted that the mayhem unfolded during curfew hours. She said that it demonstrates a high level of calculatedness on the part of the criminals.

One of Bucknor's daughter, Nekisha, said that she was awoken by the barrage of gunshots and later received a chilling phone call that her father's house was on fire. She was unable to respond.

"Mi could not come outside because it sound like a World War II bruck out inna the community," Bucknor said.

"When wi do get a chance fi come out, that time mi father already burnt to death, an him house burn down flat. That man was one of the kindest and most loving person you could find. Him never deserve to die," she added.

A third member of the community was shot in his upper body. He has been admitted to hospital in critical condition.

An elderly resident told THE STAR that the intensity of the gunfire cause him to lose control of his bladder.