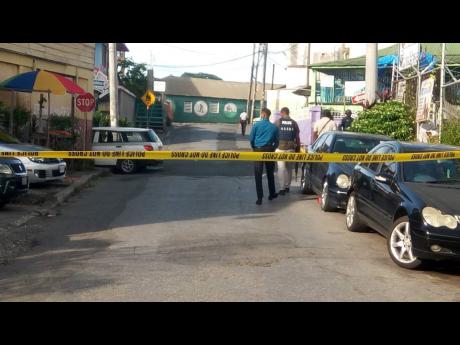 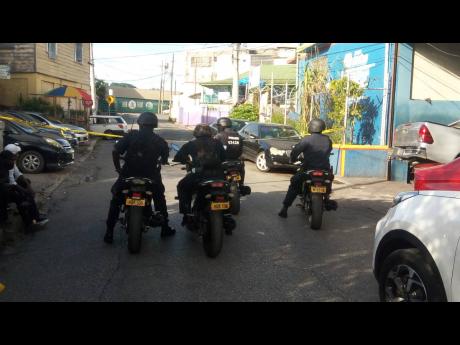 Security personnel on the scene at yesterday's triple killing in Montego Bay.
1
2

Three men were shot and killed, and three other persons, including two bystanders, injured after gunmen carried out a daylight attack on occupants of a Toyota Mark X motor vehicle, in Montego Bay, St James, yesterday.

Commuters and motorists were sent scampering shortly after 2 p.m. after four men and a woman travelling in the Mark X were chased by the armed men travelling in a white Toyota Corolla motor car.

The gunmen, who were armed with high-powered weapons, chased the other vehicle in the vicinity of Clock Towers along Upper Barnett Street, where they opened fire hitting two bystanders. Both vehicles continued along McCatty Street, where the driver of the Mark X lost control and crashed into a taxi. Both vehicles then collided with a wall outside a supermarket at the intersection of McCatty Street and Hart Street.

The gunmen alighted from their vehicle and opened fire hitting the four male occupants of the Mark X, before speeding away from the scene. The female passenger and two occupants of the taxi managed to escape unharmed. Two of the men died on the spot, while the third died at hospital.

"A the nuffest gunshot mi ever hear fire inna mi life," one eyewitness told THE STAR. "At first wi did think a dem boy with them bike muffler a mek noise, but when wi hear the explosions them start fire pon rapid, and next ting wi see is the Mark X a speed a come down the road, and the other car ... a chase dem."

The eyewitness continued "A four a wi sit dung outside deh shop front deh, suh wi jump over tha wall deh and watch the man dem come out a dem car and pump pure shot pon di breda them. Mi bredda is like a movie wi a watch."

The eyewitness further stated that after the gunmen sped away, they were shocked when they saw a woman covered in blood alighting from the car.

"At first wi think she did get shot but wi realise seh a blood from the other man dem inna the car. A di luckiest woman mi eva si from mi born," the eyewitness added.

Up to press time, the deceased had not been identified. More than 110 persons have been murdered in St James since the start of the year.