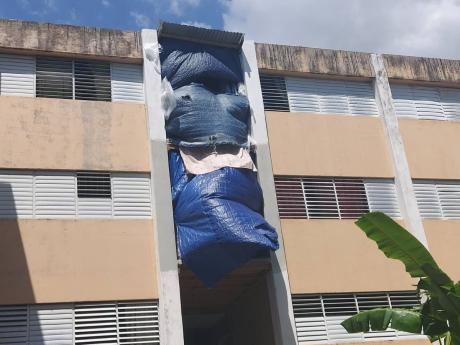 Residents use tarp to cover sections of the scheme. 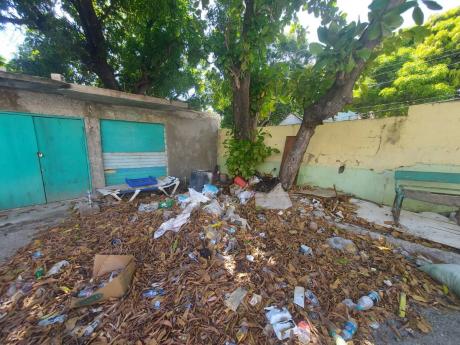 One of the many informal dumping areas. 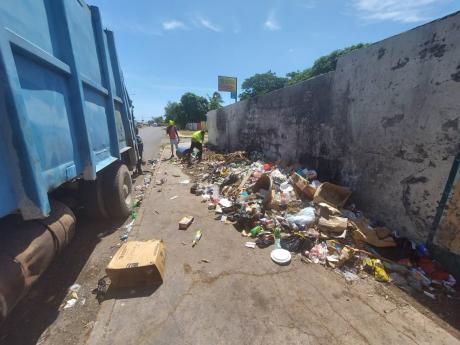 Garbage pile-ups like this are a common sight in and around Site.
1
2
3

Despite welcoming plans to improve infrastructure in and around the Fleet Street Housing Scheme in Southside, Central Kingston, residents hope they are not just empty promises.

They are also calling on Donovan Williams, the first-time MP who won his seat during last year's general elections on a Jamaica Labour Party ticket, to also address the issue of crime and violence when he has completed his beautification drive.

"A long time wi a wait pon dis dung yah so. Just look pon how some a di building dem scrape up and a bawl out fi paint," said Kay*, who says she has been living at the complex, more popularly called Site, for the past 31 years. The 49-year-old vendor said she was beaming with joy when she heard of the plans for the community.

"A decades now nobody no look ina yah suh pon wi," she added. During Tuesday's State of the Constituency Debates in Parliament, Williams declared that the housing scheme will be spruced up under a programme funded by the National Housing Trust. The work will include painting of the building, pavement of pathways, replacement of entrance and exit gates, and raising sections of the perimeter fence to ward off intruders.

Trisha, who has two children, said that she also welcomes the move but also called for serious attention on violence.

"In Kingston Central every minute yuh hear bout somebody weh dead, so I was hoping he would have expounded on his plans in relation to the violence. At the moment, here is somewhere you wouldn't want to raise your children. My kids are like prisoners to their own communities," she said.

Her sentiments were echoed by a senior citizen who also called for a new water system and improved conditions regarding garbage disposal.

"We had a skip, however, when the skip was in here it couldn't serve for the entire 168 flats inside the housing scheme with an average of four persons per household. When that full, residents are forced to dump their garbage on the outside," he said. He also called for separate water bills.

"What we have is an all-in-one water system. So if John and Tom no pay, mi nah go wah pay and all a wi have one bill. That makes no sense because I cannot be responsible and accountable for others. Wi want separate water bills because dem a ask wi fi do it collectively in a place where there is no unity, it just nah go work!" He said.

Since the start of the year, communities inside Central Kingston Police Division have seen a significant increase in murders and shootings. Williams pointed to a drive-by shooting on September 3, 2020 as the catalyst for the ongoing violent flare-up. He told Parliament that he believes one of the ways to tackle crime and violence in his constituency is to " improve our aesthetics and instill a sense of pride within the residents".

Another senior citizen said that as recently as Tuesday, gunshots rang out.

"Wi tyad a di violence and gunshot dem! I love this community. It's a community that, if it gets the right treatment, can be one of the best in the country. I just hope this facelift is the first step to making things better for residents here," she said.