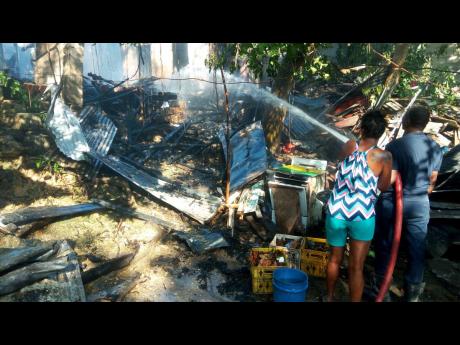 Residents of Combs Lane in Montego Bay, St James, gather outside what is left of their homes, which were destroyed by fire on Thursday afternoon. 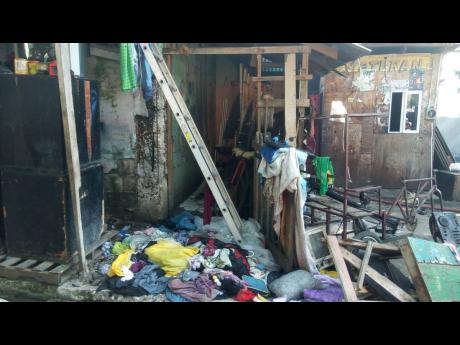 Some of the damage caused by the fire. 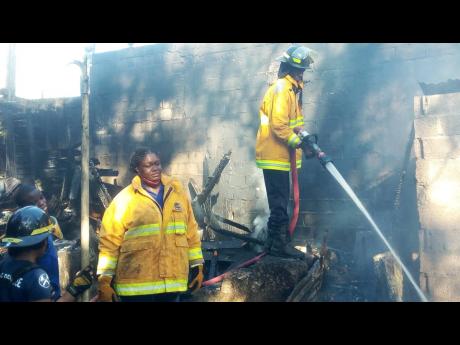 Reports are that a resident saw fire coming from one of the houses about 1:35 p.m., and raised an alarm. The fire quickly spread to neighbouring houses and residents summoned the fire department.

But by the time the firefighters arrived, the six houses were already consumed by the blaze. The firefighters had to work quickly to prevent the flames spreading to other houses. Occupants of those houses scampered to save their belongings. After the fire was extinguished, firefighters carried out cooling-down operations.

A senior officer from the fire department told THE WEEKEND STAR that they received a call about 1:45 p.m. of a fire and responded with four units, two from the Freeport Fire Station, and another two from the Ironshore Fire Station.

"We had the fire under control in about 15 minutes, but unfortunately because the houses were constructed mostly out of board, five of the houses were gutted by the fire before we arrived on the scene," the officer said, adding that damage is estimated in the region of over $63 million. The officer also said that based on what residents said, none of the houses were insured. One resident, who gave her name as Marcia, said that she and her family have lost everything.

"Mi and mi entire family stranded because wi don't even know weh wi gwan tun yah now," the woman stated. Some of the residents say they are now aiming to approach their government representatives for assistance.