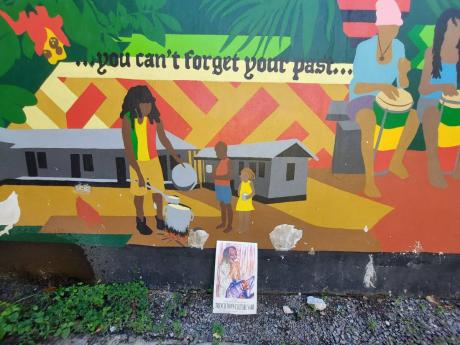 A mural of Georgie sharing out some of his popular dish is prominent in Culture Yard. 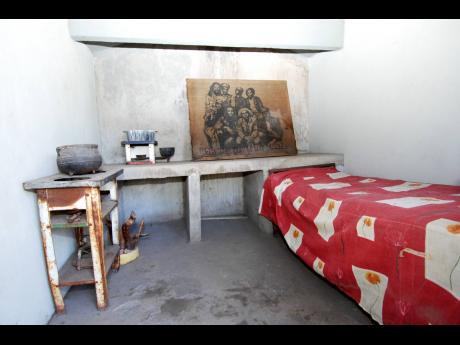 Georgie kept the fire through the night.
1
2

News of the passing of the iconic 'Georgie', who was a close confidant and preferred cook of reggae legend Bob Marley, has rocked some of the friends with whom he grew up at Culture Yard in Trench Town, St Andrew.

But Georgie was more than just Marley's cook, according to Oswald 'Stoneman' Comrie, who claims to have spent the better part of two decades around Georgie and called him "a father to many" in the community.

"When him ago look logwood a May Pen Cemetery, all the young girls and boys back ina di days never leave Georgie. Georgie ever have dem pon di cart. Yuh would always see di yute dem pon top a it and him a push dem come up," Comrie recalled.

Originally from St Mary, the legend of Georgie, given name George Headley Robinson, grew when Marley sang "... and when Georgie would make the fire light, logwood burning through the night" in his 1974 classic No Woman No Cry.

"Georgie was a mystic man. Everything bout him was in line wid nature. Bob did love reason wid him and him did love reason wid Bob ..." said Comrie. The lanky Georgie, who lost a leg in 2016 from diabetes, also inspired Marley on several other tracks.

"When yuh hear Bob Marley sing about Trench Town rock, whether you are a big fish or you are a sprat, don't turn your back against that', it is a revelation fulfilled in that. Bob name ina di rock, Georgie name ina di rock," said Comrie, while pointing to a set of rocks with the men's names carved in them.

Georgie, who residents estimate was in his 80s, was famous for his cornmeal porridge and pudding but was also widely remembered as the man who "kept the fire burning all through the night" by Cedella Marley, the daughter of the reggae legend, who confirmed the news of his passing in a social media post. Comrie said that Georgie taught them about nature.

"Dem man deh listen to the wind. Dats why Bob Marley say ' There is a natural mystic blowing through di air' and if yuh listen carefully to Georgie, yuh will hear," Comrie said. Georgie spent a number of years in Trench Town before moving to Hope Road to live with the Marleys.

"Di last pot a cornmeal porridge weh Georgie cook fi di I was in 2015 before him lose di leg. And a me alone him cook it fah, a just so me and him live, as father and son," he said.

Comrie recalled that Georgie was also instrumental in keeping violence at a reasonable low in Trench Town, even during the reign of some of the most notorious gangsters.

Having been the one who Georgie would normally entrust with getting the items for his pot, Loraine 'Peaches,' Smikle said that he was like an unsung hero to many in the community.

"Mi feel bad, man, Georgie a mi boss, enuh. When him move go up a di museum a Hope Road go live a me go deh and clean and tek care of him," she said. "When mi likkle, Georgie bun fyah right through the night then go sea a mawnin time and come back wid all some likkle snake and dem things deh. Mi memba when mi would go up a di museum and if it get late a him would a bring mi back a Trench Town pon him bicycle."