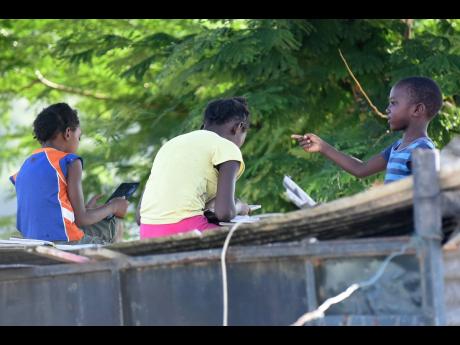 These children in August Town, St Andrew, climb on to this truck daily in order to get strong Internet signal for their online classes. 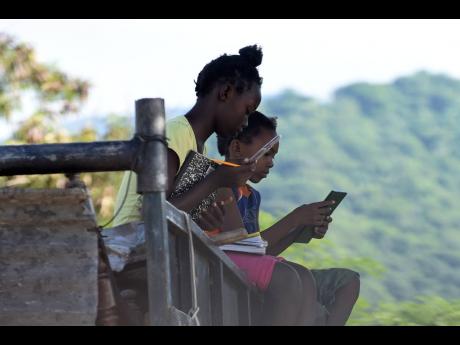 These determined children who live in close proximity to the University of the West Indies, Mona, climb on to the body of this old truck daily to access free Wi-Fi from the university.
1
2

From as early as 7 a.m. three August Town children are atop an old truck readying themselves for school. These children, ages five, 8 and 11, make their way to the top via a broken ladder. At a higher altitude they are at one with nature, being able to access Internet service in order to do their schoolwork.

Karelle Jones, 44, who is mother to two of the children and grandmother to the other, told THE STAR that the top of the old truck has been the children's classroom for the past year. The determined trio live in close proximity to The University of the West Indies, Mona, the institution from which they access free Wi-Fi. However, due to its weak signal, they are unable to use their devices inside their house, hence the decision to go to the point in their yard where it is strongest -- the truck top.

Jones recalled the frightening sight the first time she saw her children on the top of the truck with their devices in their outstretched hands.

"All I said to them 'What unuh doing up there?' I didn't exactly know why they were going up there and a when di big one explain to me what they were doing, dats when mi realised.

"There are times when I feel sad knowing that I don't have the money that they can stay down inside the house so nobody can see them, and then a next time I don't stress over it that much. I would just tell them to be careful up there," Jones said.

She added that the children are so focused on getting their schoolwork done that they often show little regard for their surroundings, which includes the weather.

"One of the times their father had to set up a tarpaulin on the truck so that when the sun gets too hot they could go underneath it," Jones said.

"Dem tell mi say up there is better than in the classrooms because they get to overlook the mountains, plus di breeze up there is good. Only when it rains it becomes a problem for them because dem affi come down and wait till it cools down," she said.

Jones said she has not been informed if the children's schools have been selected for reopening starting next week. She said, however, that they have not been adversely impacted by the suspension of face-to-face classes because they have been able to access free Internet for online classes.

The proud mother said that the children are doing well in their classes, particularly Jhonelle, her 11-year-old, who is currently in grade six preparing to sit the Primary Exit Profile exams.

"She is averaging above 70 in her grades. She was the one who came up with the idea and is the one who ensures that things are smooth for the others. She wants to become a teacher. I am very happy and proud for all of them. I remember when I selected the schools for her the teacher said that I should write down better schools because her grades are very high," Jones said.