Nicole is a woman for all seasons 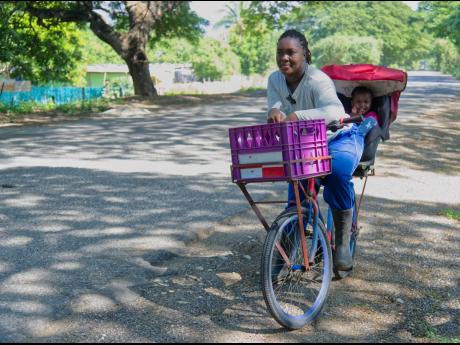 Nicole McFarlane and her niece, Talliah, making their way across Lakes Pen Road in St Catherine on Wednesday. 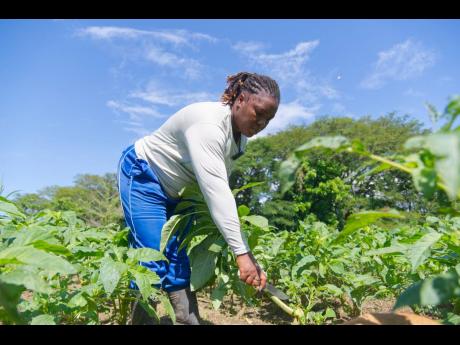 Nicole McFarlane at work in her callaloo fields . 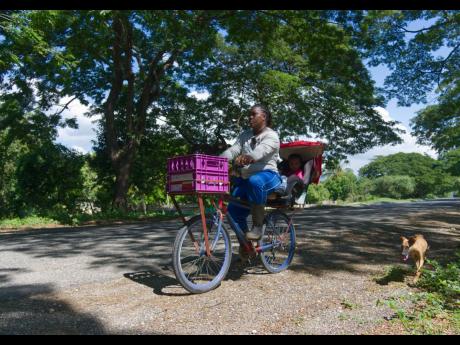 Nicole McFarlane has outfitted her bicycle with an infant car seat, enabling her to take her niece with her on some of her odd jobs.
1
2
3

Her pair of blue pants are tucked into her water boots, Nicole McFarlane flashed a bright smile at the news team and grabbed her bicycle.

This hard-working 40-year-old woman is heading to her callaloo farm, and she is taking her two-year-old Talliah with her. This Lakes Pen, St Catherine, native is not just a farmer, she is a woman for all seasons.

A video of McFarlane heading home from work with the baby on the back of her bicycle and tools in hand went viral after it was uploaded to social media last week. She said she did not expect the overwhelmingly positive feedback.

McFarlane, a 'Jill of many trades' said she got hooked on farming about six years ago, but noted that she tries her hands at many things and has mastered them.

"I used to go round and do hair and just about anything else I get to do. Mi do truck work, yard work and even wash clothes. I did babysitting for three years and I saved some money and put a little stall out on the road for about four years, but mi always a do little work in-between," she told THE STAR yesterday.

Baby Talliah has accompanied her on her journeys on countless occasions. The infant has a made-for-purpose seat on the back of her bicycle. McFarlane said she had made her mode of transport child-friendly by installing a bar on which she attaches a child's car seat. The baby is strapped in to ensure her safety.

"A long time mi a do this and a ride around on my bicycle. Talliah is actually my niece, but I have her from she was two months old, so she is my baby, suh people have been seeing mi ride around with her from I have here. It was me, her and my mother who lived [together] but my mom died, so anywhere I am going now, I have to take her. I decided to put the car seat on the bicycle and strap her down and take her," McFarlane said.

The bubbly, energetic woman admitted that she hardly gave thought to venturing into farming in her earlier days, but once she dug in, she could never look back.

"Nobody couldn't tell mi say mi would go into farming because I was the stush type, and basically a hair mi did want to do and go foreign go do some work and help mi madda. Mi start the farm and from mi do that, mi just never turn back. But any other little work mi get in between, mi do it. Mi buy mi little weed whacker so any likkle work mi get, mi go and do it," she said.

As she rubs Talliah's head to soothe her, she stated that farming isn't for the lazy and that it requires plenty of work and dedication. In addition to callaloo, McFarlane also plants okra, banana, plantain, pumpkin and ackee.

"It is a very challenging job. My main crop is calalloo and sometimes worm and mice eat dem down suh things like that can discourage you. My day begins at 5 a.m. and sometimes ends at 8 p.m. Especially when I am planting callaloo, I will start early and use my headlight and continue into the night," she said.

But mice and worms are just part of the problem. 'Two-foot puss' have made a habit of raiding her farm, which sits on nearly two acres of land.

"The fencings are all gone and a part of the reason is the thieves who break down some of them, and the rest of them get rotten down. The thieves weren't so rampant but from COVID come in, they are out. I work really hard to plant up and every week I have to buy plantain and banana same way to sell because of the thieves," she said.