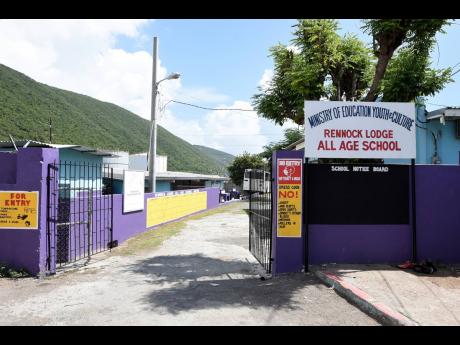 Rennock Lodge All-Age School is one of the 376 institutions that has been cleared for reopening for face-to-face schooling, but when THE STAR visited the institution yesterday, only a handful of students were present.

In fact, only two students were observed in one class in the Rockfort, east Kingston-based school. Less than 100 students are currently enrolled. Rockfort residents, however, stated that the numbers do not mean that their children are missing out on an education; they are merely enrolled in other learning facilities.

Brian, who resides footsteps away from the institution, says that although the school has a high learning rate, the attendance has dwindled significantly since the onset of COVID-19.

"Children come from as far as Bull Bay come a school before COVID but when the virus come into play, the number dem dwindle. But a nuff pickney pass from there to good school eno. Most a di children who go di school come from far so now the parents dem just send dem go nearer schools. One time is over 150 children use to over there," he said.

Tameka, whose cousin attends the institution, says her fellow residents are 'hype' and as such would rather send their children to a more 'recognisable' schools.

"It never really have a lot of students going there but the attendance rate was higher. Rockfort people kinda have this hype about them where dem feel like dem fi send dem children to other school and not the one in the area. They would usually send them to other schools like Norman Gardens and Windward Road All-Age. I have a family who attend Rennock Lodge though and he is very bright," she said.

Rennock Lodge All-Age has the capacity for 175 students. But in March 2020, only 33 students attended the institution. The recent increase in numbers has been credited to the improved performance of sixth graders in the Primary Exit Profile external exams that channel students into secondary schools. Another resident weighed in that even though the school has not reached its capacity, the community students are all getting their fair share of education.

"Every pickney up here a go school man because we nago allow nuh dunceness round these parts. Rennock is a good little school but bwoy di pople dem nah use dem. Right now if yuh go round deh is about four teachers deh there so might as well dem lock it or promote it more," the man said.