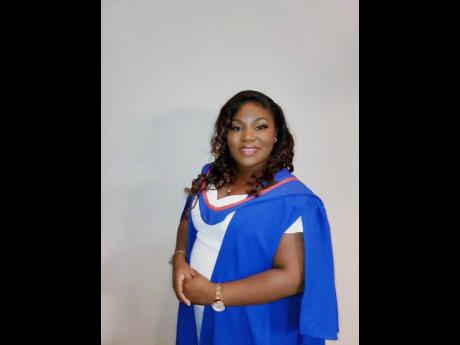 After completing her secondary education at Herbert Morrison Technical High School, Monique Clayton enrolled at the Faculty of Law at The University of the West Indies (UWI), Mona, in 2016. She had only $200,000 to her name, but this amount was only a drop in the bucket as her yearly tuition fee was US$10,000 (approximately J$1.5 million).

Her father, Fernando, works as a merchandiser - responsible for ensuring that the right amount of goods are available in store - and his income was not enough to cover those fees.

Clayton, 24, grew up in the gritty inner-city community of Canterbury, St James, and has had a deep-seated passion to use her station in life to ensure the transformation of her community.

"I saw the injustice being done, from lawmen, and I also saw community members doing wrongs to law personnel. I then developed a passion to become an attorney and I cannot say it came from anywhere other than my passion to become a judge," Clayton said.

Despite financial hardships, Clayton was determined to not let the hurdles be a setback for her in the quest to achieve a bachelor's degree in law. When she ended her first year, she owed the university almost $800,000, which made it difficult for her to register for courses in year two of the programme. She recalled a conversation with an administrator who told her that she would have to clear her debt to the university to be able to go forward.

She told THE STAR that she tried different avenues to secure a scholarship. In 2018, she participated in a work and travel programme for university students, but was not able to secure even half of the funds needed for her tuition.

"I was disappointed [because] I thought that [the work and travel programme] was my golden ticket to finishing my education," she said.

She was forced to sit out two years of university due to financial restraints.

A nudge from a friend to share her story in The Gleaner in December 2018 led to her receiving assistance for hall fees and to secure a job as a research assistant on campus. After a two-year hiatus, she was able to resume classes in 2019. Today she is the proud holder of a bachelor's degree in law, issued by The UWI. She is the first person from her father's side of the family to have achieved this feat.

"I feel like what I learnt on the journey was what sweetened the accomplishment. I feel like the lessons I learnt on the journey, the courage I developed, the growth in my character and the strengthening of my faith in God is what really made the valley worth it. One lesson is that the path to success isn't linear, it's a series of hills and valleys, highs and lows."

To persons facing financial struggles with their academic pursuits, especially natives of her hometown of Canterbury, Clayton is urging them to push harder beyond their circumstances.

"Don't give up. I mean giving up takes as much energy as pushing and persevering to the end. Chances are highly likely that the life or the quality of life that you are going to live would be worse than giving up rather than just continuing along the way. Look at what motivates you to do better, focus on that and let it be a constant reminder to you that don't stop because there is greater to achieve ahead. Even though it might look dark, it might look bleak right now, your end will be greater. It is a certainty, it is a fact that once you have God, your end will be greater so don't give up. Look at where you are now and where you want to be, don't let anyone distract you," she stressed.