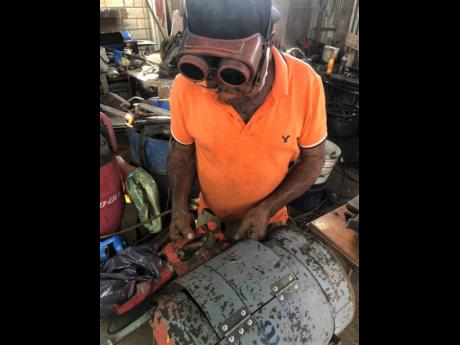 Cecil Campbell works on a jerk pan in his shop. 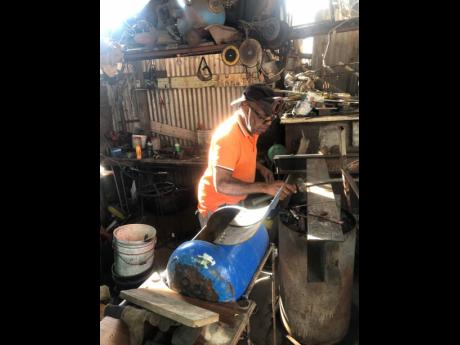 Campbell is hoping the Christmas season will see an increase in sales of his jerk pans. 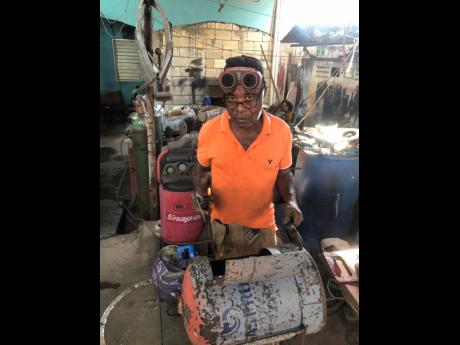 Consuming pan jerk chicken is more than just about the succulent, chopped pieces of meat, it's part of the Jamaican culture.

The jerk pan vendors' spots are fixtures that can be observed on the major thoroughfares islandwide, and there is something special about seeing the vendors lifting their pans so that the smoked aroma of spices fill the air.

But vital to the preparation and sale of the popular meal is the 'jerk pan' itself and Cecil Campbell makes them.

Campbell has been in the business for the past 15 years, creating jerk pans of various sizes for household and commercial use. Located in the Corporate Area, Campbell confessed that he realised he had a passion for welding and fixing items just after he completed Tarrant Secondary School in the 1980s.

"I usually do body work [on motor vehicles] and I can make mufflers but I decided to switch to this business because I realise that young persons don't want to learn how to make anything, they just care about the money. I enjoy making things and this is easier for me, as opposed to heavy duty work. I just enjoy it, I like fixing stuff," Campbell said.

The 71-year-old, who suffered a stroke last year and contracted the novel coronavirus earlier this year, operates the business by himself. When the news team visited his workshop yesterday, the elderly man enjoyed the company of Luther Vandross old hits and had a broad grin as he welded pieces of iron on the pan.

He shared that it takes just eight days to make the finished product, and prides himself every time he completes an order. The steps for making the jerk chicken pans include great precision and patience as Campbell describes it. His eyes beamed as he showed THE STAR how to create this cultural mainstay.

"First, I have to buy an empty gas pan and make sure that no gas is in there because I don't want it to explode on me or anything. You have to do some measurement, to make sure it precise and that's what makes it look a specific way. Then I cut it open and then I put in the grill that you put the chicken or fish on. I have to weld the irons on and the screws on it and the handle, then I do the finishing touches," he added.

Campbell, a father of three, said making jerk pans is not much different from making mufflers. He also said that selling jerk chicken pans is profitable and anticipates the Yuletide season for the additional sales it usually provides. But he admitted that there are times when he is not able to sell a single jerk pan.

The Cassia Park, St Andrew, native shared that the price of jerk pans ranges between $25,000 and $35,000 and that there is a demand in the diaspora for them but he has no intention of leaving the island.

About a decade ago, Campbell boasted six apprentices from the Jamaican-German Automotive School, who, under his watchful eyes, learned the skill of car repairs. He is urging young persons to get engaged in learning a trade to form their independence.

"I think it is something for young people to do, to keep them occupied and to know that they can make and do something for themselves. I would encourage them to learn a skill in this day and age. It is very important because it could become another source of income."