‘An honest mistake’ - St James man blames panic for saying he lost US$80,000 in flood 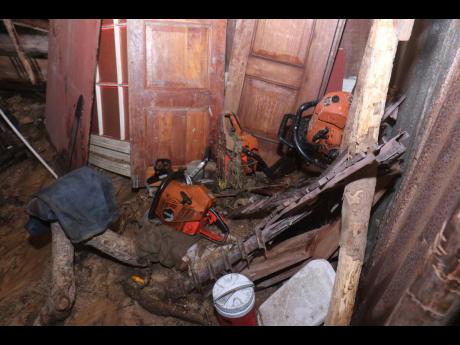 Some of Daniel McBean’s equipment that were damaged during the heavy rains on Monday. 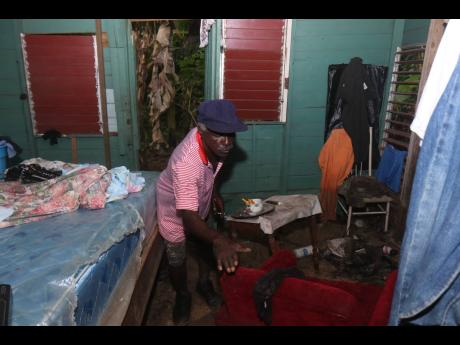 Daniel McBean, the Unity Hall, Montego Bay, St James resident who recently claimed that US$80,000 was washed away by menacing flood waters that damaged his house on Monday, said that he misspoke.

The 59-year-old McBean was subjected to name-calling and unkind comments after a video of him talking about his losses was posted on social media. He said that his bed on which he stood to escape the raging water was washed away. He also said that he lost three chainsaws, 50 chickens and US$80,000 that was under his rug in his house.

McBean, in a subsequent interview with THE WEEKEND STAR, said that me made an error with the currency.

"Mi sorry fi di confusion, but is panic mi panic when me say a US dollar. Is $80,000 Jamaican," said McBean, while adding that he had no reason not to speak the truth.

"Lying lips are an abomination to the Lord. Tell the people on social media that a mistake mi mek," McBean said. "Right now, people from the USA, Canada and all over are calling me about the money."

A terrified McBean detailed the traumatic experience he had during Monday's downpour.

"The Saturday night before rain I take $1,000 from the $80,000 and put it in my pocket to buy a drink of 'Jennifer Brown' rum and stash the rest of the money underneath the rug. The rain started, so me lay down on my bed. About an hour later, I hear the rumblings of the water come inna me place," he told THE WEEKEND STAR.

"When me look down, three feet a water I see come up so mi panic fast. The water pushed the bed, so mi try step pan a couch in the house but then it started to move with me and a sink. The rain comes harder now and a stone roll and lick out a part of the door. Mi see the water come in more now, so I jump through the other door and swim to my neighbour fence," McBean said.

A shaken McBean stated that he managed to get to a church in the community, but was knocked down by a big stone.

A lumberjack by profession for 43 years, he stated that all his tools have been destroyed.

"I even find one a me chainsaw in some garbage. The barn, kitchen and my office full a mud and muck," McBean said.

"The water mash up other people house, but me face the hardest in life. Trust me, who feels it knows it. Lord, I am a mess right now," he said tearfully.

Despite the setbacks, McBean said he has placed his trust in God to help him recover.