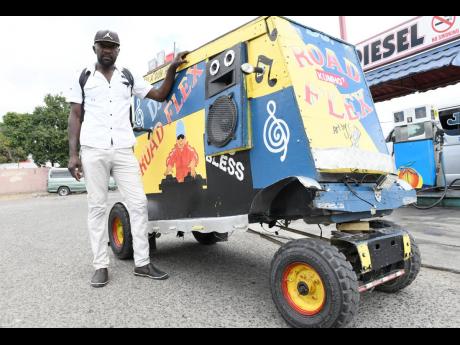 It's 2:15 p.m. and Donovan 'Road Runner' Parkinson and his best friend, Kenroy 'Road Flex' Hibberts, are about to leave Ricketts Avenue, St Andrew in search of their day's sale.

After checking their engine and petrol level, they get into gear and move off, with pulsating reggae music blaring from their vehicles. If you guessed that the duo are driving cars, you would be wrong. They operate motorised handcarts which were made by one of their friends. They have been using the carts to travel across the Corporate Area and sections of St Catherine to sell CDs and jump drives.

"Is we mash up the road. A long time mi a sell CD eno because mi see where mi can eat a food and live, suh mi just keep it up and do what mi have to do. I was a labourer before," Hibberts said. A CD is sold for $150 but a jump drive can go for as much as $3,000. Parkinson said they have been selling CDs for over a decade and their rides are perfect for the road.

"When we a do road, we nuh hold up traffic or cause nuh trouble. Now and again we will get stop by the police but dem will just question wi an run dem likkle joke and gone. One time a car touch mi and we work it out and everything good," Hibberts said. "More while we a drive and people a take out dem phone and start video what a gwan. People love it man."

Parkinson, 41, said prior to selling CD's he used to prepare breakfast for sale in downtown Kingston but had to throw in his apron because his health was being affected.

"Mi used to sell egg sandwich and tea ... but when mi lift up the tea pot, the steam start damage my eyes. Mi brethren tell mi say him ago make a cart suh mi can sell CDs and then him say him ago make one whe mi can drive go anywhere mi want to," he said.

Parkinson said that he and Hibberts have been friends for a long time.

"Him is like a blood bredda to mi. Right ya now a Harbour View mi live and a fi him house mi leave mi vehicle because mi can trust him because a mi friend like that," Parkinson sad.

"If yuh can't ride bike, yuh can't ride dis because anno simple ting dis. The 'Road Runner' is valued at about $300,000 because there is a lot of equipment in there. It has amplifiers and a 150 engine and everything," he said.