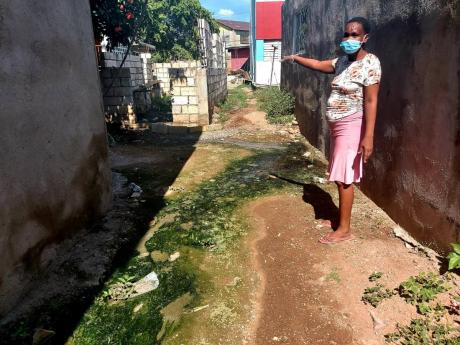 Judith McKintosh said the residents are fed up with the sewage running through the area. 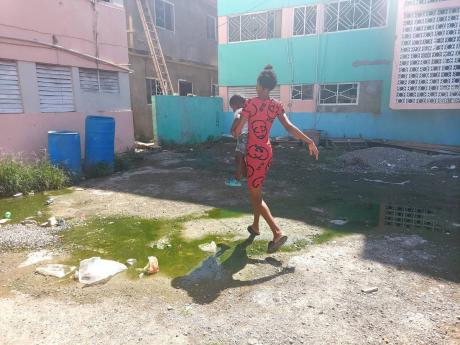 This woman gingerly makes her way around raw sewage while holding a little one. 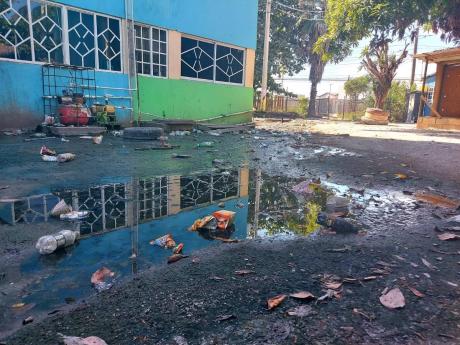 Residents say that the National Water Commission has been doing work, but a more permanent fix is necessary. 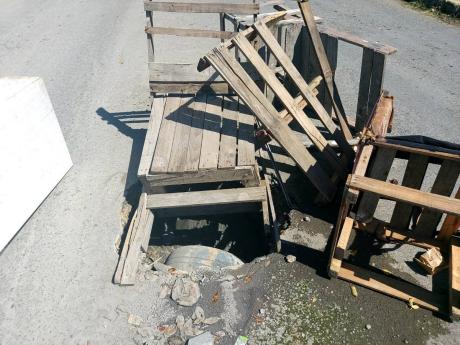 Payne Land residents use palettes to cover this drain.
1
2
3
4

A puddle of raw sewage sits just footsteps away from his small business. The stench from the sewage has been plaguing the St Andrew South community for weeks.

"It wicked round here man. Mi have to be cleaning more than the ordinary and the people dem nah come by like dem would normally do," he said.

The news team had to skip across fly-infested water in sections of the community. The residents said they were told by the authorities that the rising sewage is caused by broken underground pipes.

Judith McKintosh, a seamstress, said she had no other choice except to throw away some of her material as they were saturated with filthy water.

"Dem will come draw the manhole in the morning and as dem gone it start run back. The sewage run pon shift it seems because during the day it good but by the time it touch one o' clock in the morning, the entire place start flood out. This morning mi have to throw away mi good fabrics them. This morning a six truck come draw and by later we have to clean out again," McKintosh said.

Another woman said the residents also have to find other means of disposing of their faeces.

" Imagine a condition like this and we don't have any running water ... so how we ago manage? We can't flush the toilet because a bare s@#t water a come up. When we want use the toilet, we have to do it in bag and bucket and go dash it way. A from 3 o'clock mi a dry up sewage water and it full a bare roach," she said.

Another female resident is convinced that the raw sewage is responsible for her son's chest infection.

"Dem a say the pipe dem damage suh just come fix it nuh before di filth drown we off down here. Dis morning (yesterday) a di ankle the water reach and the mop couldn't hold it. A 10 bucket a water mi madda dash way. Mi take up s@#t water till wi tired. When we call NWC [National Water Commission] dem respond eno but dem only can deal with the matter temporarily," she said.

"Imagine water surround we but we really don't have any water. A night time when di dirty water a spew it come in like is a pipe turn on. Di place stink like s@#t. Mi have to go outside and get some sand and throw in the house to hold dung di scent likkle," she added.

Corporate Communications Manager at the NWC, Andrew Cannon, said that work is expected to begin today to repair a collapsed sewer pipe in the area.

"At the moment we are using cesspool trucks to draw sewage from the area," he said.