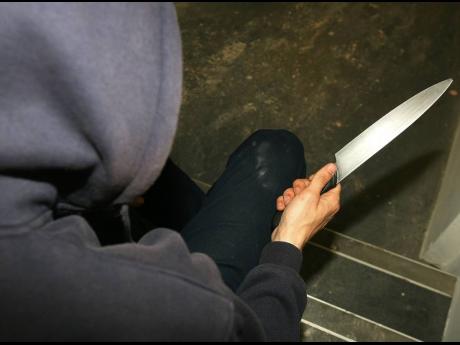 A man who allegedly held a knife to the chest of a woman sergeant of police and robbed her of her bracelet in downtown Kingston was nabbed by the long hand of the law after he was taken to the police station to be processed for another offence.

The accused, Rohan Murray, allegedly held up and robbed the cop on August 25, and then ran from the scene. However, he came face-to-face with her days later after he was taken to the police station accused of committing a robbery in St Andrew.

Murray pleaded not guilty to the charge of robbery with aggravation when he appeared in the Kingston and St Andrew Parish Court on Thursday.

The allegations are that on August 25, about 12:25 p.m., the cop was in downtown Kingston conducting business when she felt someone hold on to her right arm.

The court heard that Murray said: "Woman, don't move!" This command was allegedly repeated twice. The cop, who was dressed in civilian clothes, noticed a young man, who was not wearing a mask, holding on to her. He allegedly brandished a knife and pointed it at her chest.

The court heard that the complainant began to wrestle with the alleged robber. It is alleged that Murray twisted the cop's right arm with his left hand, until the bracelet the complainant was wearing burst, causing him to gain full possession of it.

The court heard that the cop managed to pull her firearm, which she pointed at Murray who allegedly dipped his head and dashed away in the crowd and escaped.

However, on November 13, while on station duty, the complainant was able to point out Murray, when he was arrested for another robbery that happened in Half-Way Tree. On that day, police on traffic duty along North Odeon Avenue were alerted by citizens of two suspects who had just stolen a woman's gold chain, and were said to be on board a Coaster bus. The female went to the police officer and was able to identify Murray as the robber.

Murray, who has a 2019 conviction of simple larceny, is currently behind bars for shooting with intent, murder and larceny.

Senior Parish judge Lori-Ann Cole-Montague, before whom the case was mentioned yesterday, ordered that he be remanded in custody until February 17, 2022.