Man caught in crossfire speaks out 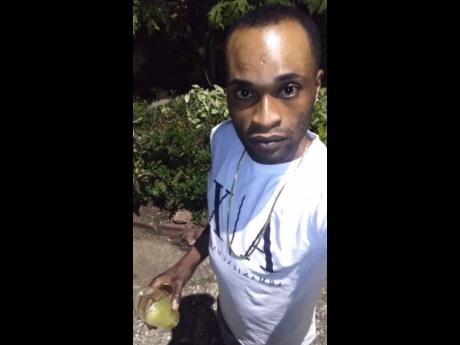 A traumatised Christopher Wright yesterday detailed the spine-chilling ordeal he experienced last Saturday as he and a friend were caught in the crossfire between police and a fleeing gunman.

Gilford Henry, a 46-year-old deportee, reportedly shot his 16-year-old grandniece Sorika Picart at least six times at her home on Lincoln Road. Wright, 32, and his friend, who were both travelling in his motor car, ran into a police dragnet trying to nab Henry. Wright said that before he could assess the situation, the sound of gunshots jolted him.

"When di bullet start fly through the glass that is when mi decide say mi cyah stay ya so ... mi dip under the steering wheel and drive off ... it come in like the gunshot dem nah stop," said Wright. He said that his friend then cried out that she had been shot.

"When she say look deh, a baay blood start spray same time. She say she feel like she ago dead. Mi decide say mi nah go dead right ya so ... mi literally wul dung mi head under the steering wheel and start drive, even though mi couldn't see weh mi a go."

Wright said he went by the Elletson Road Police Station seeking help for his friend. It was there he learned about Sorika's fate.

"Mi feel very bad, especially when mi find out say that was the reason behind the bag a gunshots. At the moment when my incident a gwan, I didn't know about what took place with the little girl," he said.

Wright said that after explaining to the cops what happened he said he was told he had to carry his friend to the hospital.

"Mi affi drag the vehicle inna di traffic, mi almost meet inna one accident on the way to the hospital because she start panic inside the car say she ago dead," he said. THE STAR understands that the woman was discharged from hospital yesterday.

Meanwhile, the police reported that Henry was arrested late Monday in Seaview Gardens, St Andrew. He allegedly also shot and injured two policemen during the firefight.